About: "2011 Anchor Christmas Ale. New tree. New recipe. Same traditions. Each year since 1975, Anchor Brewing creates a distinctive Christmas Ale, available from early November to mid-January. A rich, dark spiced ale, our secret recipe is different every year (as is the tree on the label) but the intent remains the same: joy and celebration of the newness of life.


Since ancient times, trees have symbolized the winter solstice when the earth, with its seasons, appears born anew. Our tree for 2011 is the bristlecone pine. Found high atop California's White Mountains, bristlecones are among the oldest living things on the planet. Some date back nearly 5,000 years, to the dawn of the ancient art of brewing.

Each year our Christmas Ale gets a unique label and a unique recipe. Although our recipes must remain a secret, many save a few bottles from year to year. Properly refrigerated, the beer remains intriguing and drinkable for years. Different nuances emerge as the flavor mellows slightly, much like the memories of great holiday seasons past." 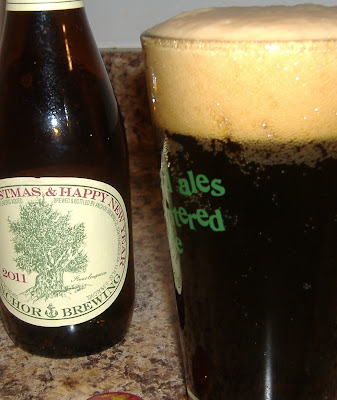 Thoughts: Poured a transparent yet dark dark mahogany, a deep red and near brown, with a super puffy head that almost seemed red itself as it slightly foamed over the top of the glass before settling into a more tan look. It took about five minutes for it to settle down to a thin and still remarkably solid layer.

This brew smells pretty awesome. I'm getting a lot of nutmeg and cinnamon straight off. A little bit like not-really oak or wood.

Spices hit up front and quickly fall back leaving a nutty and woodsy tone. Very pleasant. This is a strange tinge of fruityness in the middle of everything, kind of like a Cola. This kind of reminds me of Anthony1138's Pumpkin Brown Ale. It's got the same feel and everything. This isn't overly spiced. It's pretty laid back actually. Smell and taste are pretty much the same. It gets a little peppery later on, and there seems to be a smokey thing going on too. Piney hops are coming back up as I belch to myself.

Silky, a little watery. Aftertaste is pretty non-existent. It's there, but maybe a slight nutmeg coating around the tongue, but once this is in you it doesn't linger.

There was a little bit of sour on the very last drop. I'd suggest drinking this cold and quicker than I did. This was a pretty good Holiday Brew experience. If I had bought that huge bottle of the stuff I wouldn't have been disappointed at all I don't think. Though sixteen dollars isn't awfully expensive for a bottle that size, for a first time blind buy it hinders some. Though not nearly my favorite of the bunch, this brew didn't falsely advertise like some of the others.

Drank this one last night and it was like Christmas in a glass. The nutmeg reminded me of eggnog. The piney hops were the Christmas tree. And the smokey/roasty, nutty and fruity characteristics were reminiscent of a holiday meal. I dug the slight bitterness too, since other holiday brews tend to be on the sweeter side.

Kind of makes me sad that I haven't tried any of the previous years' recipes, but makes me excited for next year.