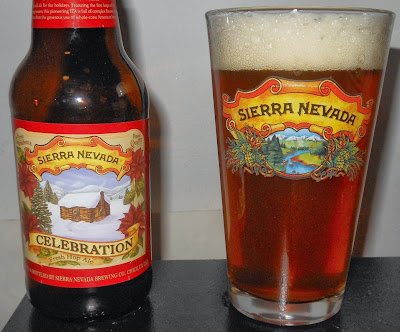 Thoughts: Poured a very clear golden amber orange with a fluffy, snowy head that lasted a little longer than some of their other brews.

Grapefruit citrus, like Ruby Red. Hops are popping all around. Little bit of pine. Man, this really takes me back. I remember the first time I bought a six pack of this, I don't know if it was 2003 or sometime around there, but I've never forgot how much I loved this brew. Back then I had never really had such a beer to this extreme.

Major hops hit at all corners of the mouth and back of the tongue, it's spicy and tingling, with a low level of malt that tries to sneak in and calm things down. Better luck next time malt! Oh malt, I'm just playin' with ya. Don't cry! The super subtle malt really does back it up nice... kinda like how Robin backs up Batman, that is!

There's a long bittersweet that sticks around at the end. It's very warming in the belly too.

If you're a hop head, you've probably already tried this. And if you haven't, this strong and easily found brew (later in the year) will either make you one, or totally break you down into buying another case of Amstel Light. Myself, I just finished a single 12 oz bottle off (gotta save up for the pricy stuff - doin' reviews here) and man do I feel good! This is my all time favorite Sierra Nevada brew.

Note: This is the start of my short but not-so-necessarily sweet Christmas Brew Review for 2011, to be summed up at an unknown later date and perhaps even discussed. This beer has always reminded me, not necessarily of Christmas, but of December, Snow and Festive times. I've always loved snowfall. Sometimes when I look around town in the later months and see everything covered with the stuff, my brain just automatically goes to that Celebration label. Then I think about how much fun I had the first night I drank that entire six pack alone in the dark...ness. Good fucking times man!

I'm with you on this one 100%. Celebration is a great brew, no matter the season. I remember the first time I tried this, not sure what the year was, being completely surprised by what I was tasting. I was more used to malty and spicy seasonal beers, not a hop forward IPA! I love it so much that I chose a pint of cask aged Celebration over the 35 or so other rare Sierra brews at the 30th anniversary event I went to. And yes, it was a good choice.

I like the trend that Sierra started with Celebration, the seasonal IPA. Other breweries have taken up the practice for their Fall brews, though I can't think of another Winter IPA. Celebration is a great change of pace from all of the heavy, dark and malty holiday ales.