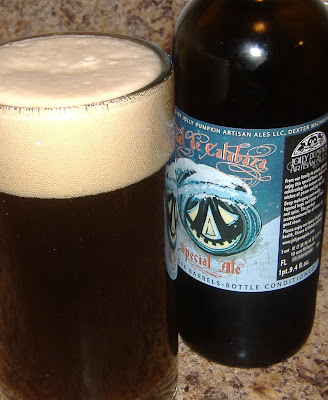 Thoughts: I had to grab this one. A Jack-O-Lantern with a Christmas cap covered in snow? Heeeelll Yeeeeaaahh... as I popped the cap, it went flying! There's some yeast around the inside of the cap, foaming. I stop, and say a backwards prayer to Lord Glenn Danzig, before setting out to get that feeling he doesn't tend to indulge in: Un-sober.

Poured a dark, very murky, brownish-orange that looked a quite grim actually. It had a huge, fluffy egg-nog white head that was all small beautiful bubbles hiding underneath a thick froth. Thousands of carbonation bubbles rapidly float upward all around the edge of the mug. There's still one-fourth left in the bottom of the bottle that I'll pour in once it's warmed up a bit.

All the voices in my head agree, this smells pretty awesome. It's not jumping out at me like a hurled pumpkin to the back of the dome, but it definitely smells of a Pumpkin type beer (note: there's apparently no pumpkin in this). Sweet and a little bit spicy at first, the more I take it in I start to notice flowery hops. Very earthy and like a fruity pulp.

Light spices... spices... alcohol shock to the facial nerves!... mellowing, pop of hops... second taste: getting fruity tones all around, a malty sensation starts to flow in, then a little bit of sour mash or yeast. After another high alcohol tinge, some sweet sugary candy fruits come through, and then are backed up by those sour, flowery hops. Tasting the air in my mouth a bit and I'm getting freshly cut grass. Cherries. Granny Smith Apples. This is what Mad Elf should have tasted like. The flowery hops (perhaps that strong, sour yeast) are distracting me a bit, overall lowering the score on this one, but it more than makes up for it with the other flavors. If there are those dastardly Saaz hops in this, they're present but laying low just enough.

Thick and frothy. Very giving in the puckering effect department.

It's a bit tart for me. Aftertaste is the wood from that oak barrel. It's all interesting and a sensation in itself, but the semi-overwhelming sourness puts a harness on this rabid weasel!

Alright, pouring the rest in. There were only a few little pits and pieces floating around earlier on, and it hasn't seemed to change this time around. Though, it's really hard to tell as the brew may appear a little lighter from an angle, once you try to look through it the middle turns darker than dark. It's not the most balanced that it could probably be, but the malts do a fine job of holding that sour back a bit... not much, but a bit. The malts and spices (that aren't heavy, nor peppery) save this brew from complete disaster. That yeast is strong! And whatever hops they used didn't exactly help matters. Thankfully it seems it all has worked out in the end, aside from a dry raspy feeling I'm gettin' in my throat right about now from talkin' so much.