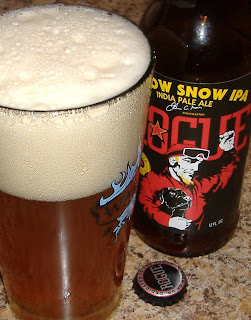 Thoughts: Poured an über light and pale straw yellow with a very slow to form head that puffed up twice its size and spilled over a bit. I may have poured somewhat aggressively. There are bubbles of varying sizes all over the top that bubble down into a frothy stark white head.

Getting some sweet smelling hops first off. Little bit piney, with a touch of lemon zest.

Starts off pretty bitter and gets even more bitter afterwards on the first gulp. Citrus hops demolish the roof of my mouth while grassy hops crawl under the sides of my tongue. The malt is so light it's almost non-existent. I'm not getting much of a taste aside from massive hops and bitter. While I like how strong the hops are here, I'm having trouble identifying with anything else about the beer that I really like... aside from the mouth feel, which is pretty amazing:

It's thick and seriously creamy. Creamy like a warming milkshake.

Finish is dry and mellows later into a grapefruit tone. That's about it. This is offically my second Rogue Ale. Surprisingly I've never tried their Dead Guy, which seems like it would be right up my dark alley. That didn't sound right. Uh... this is a decent brew, but not memorable at all for me. This has four malts and two hops? Could have fooled me and I guess they did.

Email ThisBlogThis!Share to TwitterShare to FacebookShare to Pinterest
What the... Beer, IPA, Rogue

Haven't had this one, thought he name isn't appetizing. Rogue should probably note that no pee was used in the brewing process. I've only tried a few Rogue brews. Dead Guy is good and Hazelnut Brown Nectar is really good. I've also had their Chipotle Ale, which is worth a try too.

I would love to try a Chipotle Ale.

As for the "Yellow Snow" thing, yeah, that was twice in one week where Pee was referenced while I was drinking. Scary stuff.