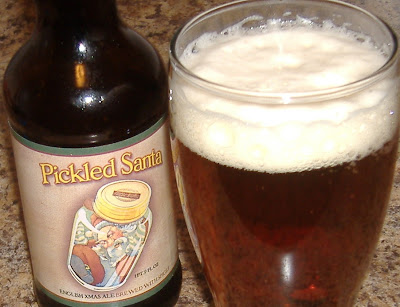 About: "The base beer is simple but very traditionally English, being brewed with 100% Maris Otter variety malted barley and 100% whole Golding hops. A hint of the unusual side of Pickled Santa lies in the name because it is brewed with a selection of whole spices. Not flavor extracts, not essential oils, and not ready ground supermarket blends. Whole spices weighed and blended, bagged up, then carefully but repeatedly run over with a two ton fork lift truck driven just for good measure by 260 pound Brian to crush them ready for addition to the brew."

Thoughts: Poured an awfully light, super transparent yellowish amber with a fluffy white one-inch head. There's a lot of carbonatioon bubbles rising all over the place.

Smells like beer. There's nothing really jumping out at me... a slight sweetness perhaps.

Well the spices are very subtle. Nutmeg and a little bit of cinnamon. They're underlying throughout the whole brew, but nothing really happens anywhere. Bittersweet, bready malts. Little drizzle of vinegar inside of your Coors light sir? Why yes. Indubitably. Boring. I wish this did taste like Pickle beer. I fuckin' love pickles! Especially Claussen halves and Vlasic Zesty Spears. At least it's a little sour.

Very fizzy and light to medium feel. Puckering is slightly in effect.

Consider me not impressed. The bottle just flicked the cap towards me as I typed that. Freaky. Hey, Christmas Beer Ghost you're not going to change my mind about this. This beer is pretty bland and uneventful. Shame too. I thought the artwork was pretty cool and kinda funny. It's really nice that they're using real spices and putting a little effort into that aspect, but the foundation of the beer is just weak. Also, six bucks.

Email ThisBlogThis!Share to TwitterShare to FacebookShare to Pinterest
What the... Christmas Beer, Winter Warmer