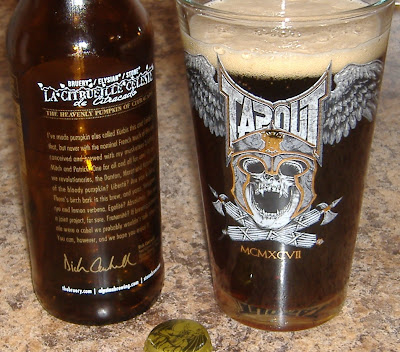 Thoughts: Yes, a pumpkin beer released in November (October 31'st to be exact, but it depends on where you live and how your stores operate). Poured a darker amber, light brown color with an off white head that left a few clumps here and there. The brew is hardly see through, and there's a very good amount of carbonation flowing upwards.

Smells very interesting. I'm getting a strong scent of that lemon verbena first and foremost, followed up by sweet marshmallow covered baked yams. Then the Rye.

It's definitely unique, I can say that much. Despite the use of so many malts, or so many different malts, the hops seem to shine through - most likely those New Zealand ones. It's spicy, citrusy, a little earthy and tastes a lot like pumpkin and yam puree. Like baby food. Halfway through, some of the malt becomes more apparent, like a sour caramel. I just brought up some air inside my mouth (you know, belched quietly) and it tastes just like leaves. That must be the birch bark. The toasted fenugreek seeds are giving it a light maple syrup aura once it starts to warm.

It's a little thin and watery. It's also lacking in the serious alcohol department.

Overall it's an interesting beer, but I think it may have gone a bit overboard with the lemon zest. It simply engulfs the nose and mouth. The other flavors do shine through, but the lemon is always lingering about. With some adjustments to all of the ingredients this one could end up great... just as long as they doubled the pumpkin and throw in a little Belgian Candi Sugar. But I say that all the time about everything. I don't mind the strong hops here, but I was expecting a little more malt. I don't know, it is malty and hoppy and it's pretty well balanced actually, but it seems as if they hadn't used enough of it... or perhaps it should have a higher ABV. I don't want to nitpick though. It tastes good, even for the price, there's no funk, and I'm not disappointed at all. But it could be better.