I drank a lot of beer in the last three months, and I did approximately 94 beer reviews in that time. I don't know if that's "eXtreme!!1" or what, but it was definitely an interesting experience that taught me a few things about beer and life. Allow me to share.
When I regained my sense of taste after almost going ghost, I made a non-conscious decision to try some new beers that I've never had. This was about halfway through October (as I searched for mysterious and hidden Pumpkin brews on the shelves, I did a lot of label reading and became quite interested in trying many of these craft beers). Now a few months later, whenever I hit the craft brew section of the package store I get a range of emotions from stupidly giddy to utterly determined. Beer is never going to be the same to me.
It's become more than just Beer! It's an experience, a feeling, a tone... for life. So much negative stigma towards beer due to irresponsibility (not my only crime), that I cast aside in favor for a more positive vibe. Beer is meant to be enjoyed and should always be there for you, helping to make your good times with with friends, loved ones and even alone, even better! I've done a lot of reading on beer and beer news lately that it's become more than just a pastime, but also an interest. I am genuinely intrigued by really good, interesting and new beers.
I did a Halloween brew and Christmas brew series 'type of thing', and what I learned from that is I'll not be doing this again. I will of course continue to do Pumpkin beer reviews each year, but from now on I'll be focusing on just the beers I want to try and not impose some forced uh, boundaries on myself. Basically I came to this conclusion when I did that Christmas series. What is a Christmas beer? I don't fuckin' know. I guess you could just slap a Holiday label on any beer and then it becomes one. That's my conclusion. I had this idea for a Holiday Brew Review Summary, aka "Tis The Season To Get Fucked Up!"
Other possible summary post names included the following:
"Santa Clause Is Coming To Drink!"
"Hark! The Herald Boozers Puke!"
"Frosty The Beerman!"
"Silent Burps!"
...and my personal favorite, "Deck The Bitch With Fists Of Stupor!"
Ah, domestic violence. What a joy. But of course, "Tis The Season To Get Fucked Up!" just sounds so FUN! Well, that all went to shit after I tried those beers and none of them had anything remotely Christmas-Like about them... except for one:
Hoppin' Frog's Frosted Frog Christmas Ale! 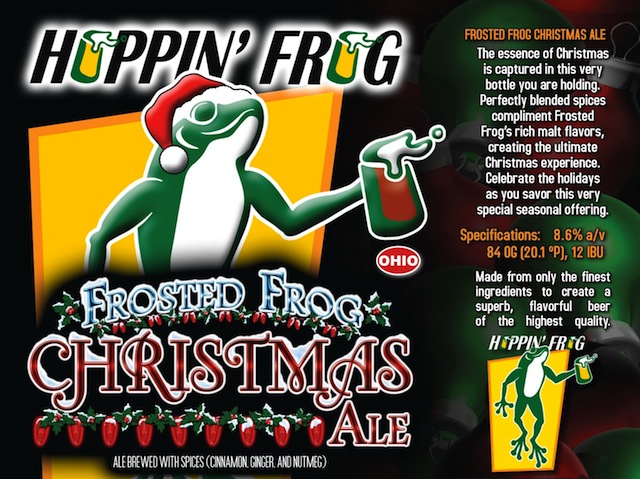 You want Christmas in a bottle? This is it! Nothing, absolutely nothing compared to this. After the confusion of trying a few of the so-called Holiday beers (that had left me crushed like a baby's head from a tree stump stomp!), I finally found what I was searching for. This beer is one of a kind, and it left me with only one lingering thought once I had downed it: Moar! Which brings me to:
Beers that I bought... again!
Aside from the session beers, I did a total of 3 Re-buys. These beers I liked so damn much that I simply had to get another one. Hoppin' Frog's Frosted Frog was one of them. The other two?
Wachusett's Imperial Pumpkin Ale 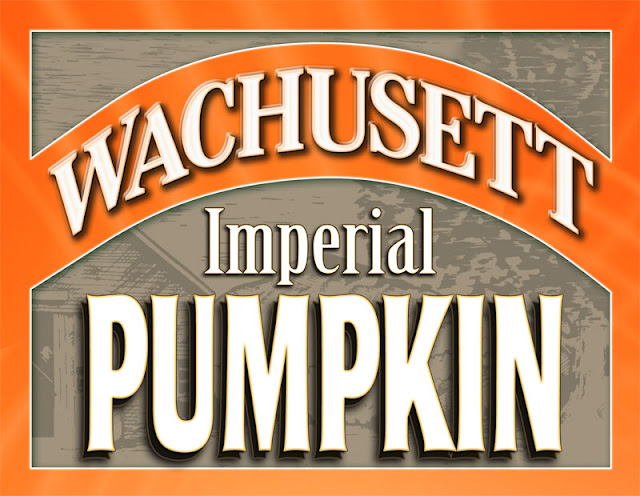 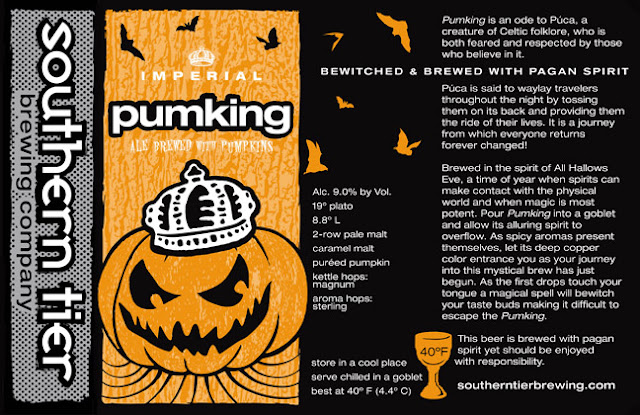 All three of these beers are wonderfully spiced and the most perfect representation to the holiday season. Not to mention that they are all just fuckin' incredible experiences. 2011 was the first year for this new Wachusett Pumpkin Ale and they nailed it. The taste of this brew simply demolished the other pumpkin brews and left their gourds laying about the misty streets. Pumking did incredible sales around here I noticed, as people were just going absolutely nuts for the stuff... and for good reason. It's more than a beer, more than a Pumpkin beer, it's a meal in itself. Like it says right there on the label, this truly is a Mystical Brew! It's got a powerful aura about it that will take over your senses.
Aside from those three beers that completely "changed my life" (to quote my cousin Shane after his viewing of Fight Club and American Beauty), I found that I'm really a Barleywine guy, overall. I haven't found one that I didn't luv. Barleywine is a splendid style that's rich, flavorful and sweet. It makes me smile inside. On the other hand, Stouts are an odd bunch to me. They tend to taste similar, and I've never really been into coffee so I just can't see myself enjoying these on a regular basis. Though, when you find one that's rich and savory, creamy and smooth it really is a treat. Any watered down feeling Stouts really do suck. I think I got pretty lucky with the stouts that I've tried. Wolaver's Oatmeal and Southern Tier's Choklat specifically.
When I started reviewing beer it was actually pretty tough. Though I think of myself as being fairly good with words, it was hard a few times to come up with something other than "this tastes pretty OK I guess." I learned to love the diversity in beer, and doing so many reviews in such a short amount of time, I found that it got a lot easier for me in the last month. I tried a lot of beers which were still fresh in my mind and helped comparison-wise. Reading the ingredients in certain beers, and documenting it of course, I started to notice certain things I like or don't.
Anytime I opened a bottle, I finished it (with only one exception - my single drain pour of the year). I've had good beers and lousy beers, flavorful and tasteless beers, a few tremendous beers and even some really strange beers. I've been surprised, let down, confused and even at times worried... but most of all, I had a great time doing it all. "Drink a few beers, take a few notes. It was fuuunnnn!" In an effort not to get burnt out or too too boring (I know, I've got my moments) I'll most likely not be going beer review crazy as I have been. There are some beers that I'm still really looking forward to, such as more of the offerings from Southern Tier and Dogfish Head.
Until then, I might just take it sleazy. Then again I might not.
Laid to Unrest by DrunkethWizerd

Email ThisBlogThis!Share to TwitterShare to FacebookShare to Pinterest
What the... Beer Summary

Love the beer reviews, man. It's great to get a new perspective on beers that I've already tried, not to mention all of the new brews that you've turned me on to. Keep on drinking and writing!

Thanks. Really means a lot!