The rest of the Samuel Adams Winter Pack.

About: I couldn't choose a quote I liked and didn't feel like combining them, so here's two: "In total, four types of malted barley are used in the brewing process including a variety of German malt called Carafa. This specialty malt, along with a bit of flaked oats, gives our Holiday Porter its smooth, roasted malt character. Add generous portions of imported hops to the mix and one has a brew that is both robust and drinkable." 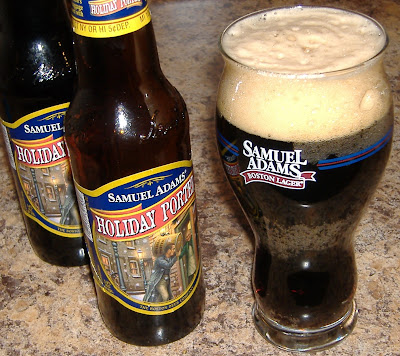 Thoughts: Poured a very dark amber that turned to an almost non-transparent brown.

Taste fares quite a bit better. Nice blend of hops and malts here. It's a little heavier than their standard stuff thankfully. This porter has a pretty cool smokey flavor to it, there's minimal bitterness and it tastes quite good. Only problem is that it's a bit tame. I'm halfway through and not excited at all, nor half-way interested even.

Feels like a medium-thick. It's creamy and mouth coating.

I'm not much of a Porter guy. And even then, some of the Imperial Stouts seem to test my patience. Also, it seems I'm one of those Keep Giving Sam Adams Another Chance guys. That, on top of my declining Most Beer Is Nothing But A Chaser attitude, this doesn't bode well at all does it? The lack of kick here just doesn't do it for me. Or was "lack of kick" what they were aiming for? Perhaps I've been spoiling myself lately and just fail to see the silver lining anymore when it comes to "normal" brews. Maybe I should be eating some kind of meal while I'm drinking this one. It only seems fit.

This beer is not unpleasant, don't get me wrong... It's actually pretty decent. Will I buy it again? Well, I was forced to this time around you see - as it was sold only in the "Winter Classics" 12 and 24 packs. If I could have I would have preferred to just drink a 22 or 40 oz. of Fezziwig and leave the rest to my imagination. I don't mind it all that much however. I'll just chalk it up to another Porter for the experience of learning more about this style. Hey! There it is. The silver lining. Well fuck me silly with a crutch and call me Tiny Tim. 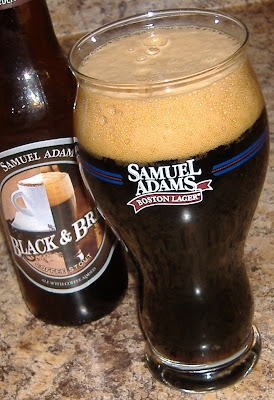 About: "We use 1.5 pounds of Sumatran coffee beans per barrel, roasted to nearly an espresso level roast to ensure the strong coffee character, added late in the brewing process to provide the most flavor possible."

Thoughts: Poured a very dark brown, almost blackish, but you can still see the dark auburn brown tones in the pour and the swirling. The head is a chocolatey tan that's a bit frothy and beautiful like a milkshake. It's taking a while but the head is slowly bubbling itself away.

Smells pretty sweet at first, almost like Wachusett's Milk Stout. Let it warm for a minute or two... sweet coffee comes through a little stronger. Just sneezed. It smells a bit malty, and the head is clinging to the glass.

Let's taste it. Yep. Tastes like coffee. One more time. It's decent. Little bit flavorful, malty, and there's those semi-bitter roasted coffee beans on the second try. Not that I was searching, but it seemed as if the sweetness was toying with my emotions.

Thin and watery. It's a bit tickling after a while. Not really dry, but drying. It's coating around the whole inside of the mouth.

Never really goes too bitter, and it never really gets too sweet. Of course, I should have expected that. I'm enjoying the beer somewhat, even though I'm not much of a coffee fan. It tastes just good enough that I feel as if it's being deceptive. It's just too light for me. Like if this beer were music, it would be a catchy pop song that you know fucking sucks total balls but is repetitive enough that it tricks your brain into thinking it's enjoyable. Remember Britney back in the day when she was doing all that teasing shit? That's this beer. 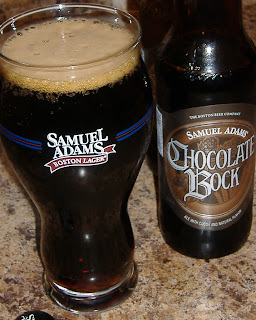 About: "The flavor of the chocolate is developed by aging the beer on a bed of rare dark cocoa nibs.  The cocoa nibs, a primary ingredient in chocolate, impart an aroma and flavor of fine chocolate to the beer.  As the beer matures, the flavors are released into the liquid to give the brew a complex, full bodied taste and velvety finish. A hint of vanilla is added, also used in making chocolate, to meld the combination of flavors together.  This combination of flavors results in a malty, chocolaty, and wonderfully complex bock beer. Hops: Noble Tettnang Tettnanger and Spalt Spalter / Malts: 2-row Harrington and Metcalfe, Munich 10, and Caramel 60."

Thoughts: Poured a dark brown with shades of deep mahogany, with a thin and rapidly diminishing tan head.

Little bit of a chocolate scent. Something kinda spicy about it, like black pepper but not really.

Tastes pretty standard I guess. Not really diggin' it all too much. Not malty enough, that kinda spicy thing I was smelling sure ain't in the taste. It all seems very clouded. Getting very subtle hints of roasted malt that thankfully doesn't remind me too much of coffee, and some weak cocoa powder. Tastes kinda like a warm, dingy soft serve ice cream from a buffet. You know, one where the vanilla and chocolate don't taste "quite right"? Especially when compared to the gourmet shit.

Goes down like water. Starts to tingle on the tongue if you don't gulp it down right away.

Pretty bland overall. Sam Adams really need to step up their game with their normal brews. This is the last of my Holiday 12'er and I've got to say that I'm pretty disappointed with the pack as a whole. Porter, Coffee and Chocolate were just too similar of styles, feels and tastes. Their Boston and Winter Lager are pretty similar too, with Winter being a slightly superior version; Winter and Fezziwig especially being the standouts, but let's face it: People are being forced to buy what I feel isn't necessarily horrible, but rather mediocre brews, just to get a few beers that are slightly above average.

I don't give a fuck if these are packaged as "incentives" to get you to buy the "variety". It's bullshit(!) because their "variety" needs to be of a higher standard than this. Huh, I guess it's official. I've drank way too many awesome beers. I can't drink this normal shit anymore. It's not cuttin' it for me! Put Old Fezziwig into Holiday 12 Packs of their own, because I'm not doing this Ever Again. 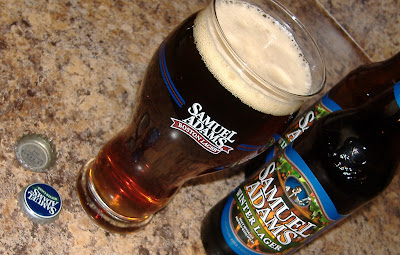 Thoughts: Poured a pretty rich looking darkish red amber, or light brown, with an off-white head that stayed puffy for a while.

Cinnamon and zesty hops. I'm so used to cinnamon and malt lately that this one (being the first beer of the day) just crept up the sides of my tongue and attacked my pucker sense. Little bit roasty and maltly once that hop bit fades. The taste is pretty mild. The cinnamon and ginger are decently represented and the whole beer has a pretty good flow about it. Orange peel hops dominate, with the cinnamon backing it up and a low roasted malts flavor with a pinch of ginger.

It's a light medium with a bit of froth.

Bitter citrus aftertaste. Roasted malt finish. Decent enough brew, but it suffers a bit from being a little too similar tasting, like their other beers.

About: "Samuel Adams Boston Lager uses only the finest ingredients including two-row malted barley and Bavarian Noble hops. The sole use of two-row barley not only imparts a full, smooth body but also gives the beer a wide spectrum of malt flavor ranging from slightly sweet to roasted. The Noble hop varieties of Hallertau Mittelfrueh and Tettnang Tettnanger add a wide range of floral, piney and citrus notes, which are present from the aroma, through the taste, and all the way to the lingering smooth finish." 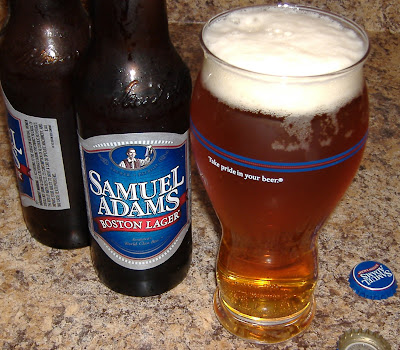 Thoughts: Poured a fairly light yellow amber with some orange shades in the shadows.

Not really getting much of a scent at first. After a while it's got a bit of a spicy tone that's pretty nice.

Light hops and malts, blended quite well. Little more hop than malt, which originally made this beer stand out. Compared to other lagers, this one is a bit stronger in the taste department and certainly in the hops. It's slightly bitter but still pretty good. Overall a nice blend with no real downside taste-wise, aside from some a grassy after bite.

A light medium with a bit of froth. Somewhat watery. Mild tingle.

Personally I've never had a problem with Sam Adams lager. Never particularly loved it either. For what I'm getting, their year round six packs are just too expensive for this (which is why I don't buy them normally). Is it better than some of the other lagers out there? Yeah, sure. After all, there's only a few good ones out there anyways. But a Lager is a Lager, and a Lager is a Chaser. If I want to buy beer for the taste I'm not going to buy an everyday Lager, it's a simple... as... that.

So people, including myself, should just shut the fuck up 'bout it. Hey, I buy beer for the taste too! Not that I've got an issue (it can't not be brought up when you review this particular staple of everyday beer), but a lot of people talk down on Budweiser or Natural Ice when there are far worse beers out there. If it's all about taste, then buy something that tastes Exceptional. As far as I'm concerned, Lager wars are about as pointless as The Scary Snowman's Third and subsequent videos. You're still going to watch them all, but the joke gets old fast.

I can't count the times I've imagined taking a flamethrower to my own nuts while listening to some arseholes going on about Bud Light vs. Coors Light. They're Light beers for fuck's sake. And for me, Regular 4.9% through 5.9% ABV beers are Light! Personally, I'm looking forward to more of the higher ABV special releases that Sam Adams will hopefully be putting out next year. I had a really great time with their 4 Batch #1's (Man, I wish I had bought and saved one of those Griffin's Bow bottles for later), and hope the next batch features all new stuff.