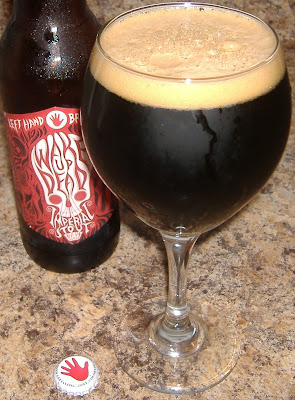 About: "So you woke up dead! Don’t be discouraged. Here’s a black ale to brighten your day. Wake Up Dead lurks in our cellars for over 4 months before being unleashed. Hints of raisins, black licorice, coffee and dark chocolate are followed by earthy, herbal hop notes. Any apprehensions about the rest of your day are quickly forgotten, for whatever the mind expects, it finds. Sometimes you’re not in the mood for what everyone else is having."

Thoughts: Wake Up Dead poured a very dark brown with shades of reddish-auburn around the edges. The white chocolate head was very slow to form and faded pretty quick, leaving a puddle of glop in the center.

It smells pretty darn sweet. There's that malty chocolate coffee that's to drown in. I hope Left Hand can redeem themselves from their fantastically light and standard 400 Pound Monkey IPA.

Starts off malty with a little bit of cocoa and then a high tinge of the alcohol takes over. After a while it retreats back and leaves coffee on the tongue with a burning sensation in the stomach. Hmm... well the taste sort of depletes on the second gulp. There's still that high alcohol which I savor, but it's not extraordinarily good or anything. After a while, it just seems unfinished. There's hints of raisins and it's a little smokey and astringent. After that the taste just disappears! It's not funky, or sour, or bad tasting. But things just stop happening and it becomes rather Meh!

It's a bit creamy, but with a watery feel throughout. I can't taste anything in the after-effects other than liquor.

Overall, this brew suffers from a weak backbone. The coffee and chocolate fall flat real quick and what's left behind is a bit of sour booze. There's just not enough flavor here. Worst Imperial Stout I've had thus far. Heavy alcohol that's not masked in any way, shape, or form. And what's weird, is that it seemed to get worse as it warmed up. That's a bit rare with these kinds of brews. Final thoughts: Cool artwork though. You fuckers got me again! After-After thoughts: There's a Barrel-Aged version of this one going around supposedly.  I'd like to try it... but tonight, I'm in the mood for "something everyone else is having."

Email ThisBlogThis!Share to TwitterShare to FacebookShare to Pinterest
What the... Beer, Imperial Stout, Left Hand