About: "Spicy and bold, a big Christmas cookie of a beer! Samuel Adams Old Fezziwig Ale is bursting with spices of the season. With a remarkably full body and flavor it helps those long winter nights pass more quickly. The rich taste hits the palate with a depth of malt character ranging from sweet toffee and caramel notes to dark, roasty chocolate notes. Then the spices come in full force. Cinnamon, ginger and orange peel dance on the tongue bringing with them the celebratory spirit of the season." 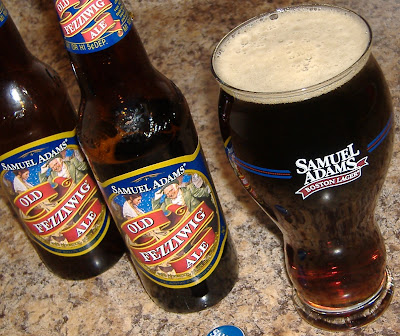 Thoughts: Poured a deep, dark mahogany. It's so dark that without light it looks almost black. There's some brown and seemingly purple tones when I look around the glass. It's transparent and actually a really beautiful color. Almost mysterious in nature. The off-white head was slow to form, and there wasn't much of a puddle left after it fizzed away.

Smells pretty good. There's that recognizable Sam Adams scent, with a little bit more of a slight malty milkshake. The cinnamon bounces all around as the bubbles pop under my nose.

I get ginger instantly, followed by cinnamon and then a total flow of malts that foam up in the mouth. It's kind of nutty and bready at the same time. The spices really fall back once it's swallowed.

I swirl it around in the glass and take another scent. It's got a very roasted essence about it. The taste is pretty mild overall. It does taste rather excellent however, and not too sweet. It reminds me of a Lighter Holiday Ale done right. It's not as falsely advertised as this year's batch of Harvest Pumpkin. I somewhat wish that I had another bottle of the stuff right now to compare these two brews, because they're awfully similar! Though cinnamon seems to be more well incorporated this time around and doesn't leave so much of a dry residue.

Just violently poured the rest of the second bottle in the glass. Huge bubbling off-white with tan around the edges head this time around. Still fades pretty quickly. This is a pretty smooth beer. A little watery, yet also a little bit silky. Not sticky and it doesn't seem to dry me out at all. Aftertaste is a bit like sweet apples, only very faint.

Email ThisBlogThis!Share to TwitterShare to FacebookShare to Pinterest
What the... Christmas Beer, Samuel Adams, Winter Warmer

Haven't poured any yet this year, but have four bottles on hand. I really dig winter warmer style ales, and Fezziwig is one of my favorites. maybe there's some nostalgia going on here, but it's always been my favorite out of Sam's yearly Winter collection. Had it on tap last year and enjoyed the shit out of it without the company of any quasi-hipsters, thankfully.