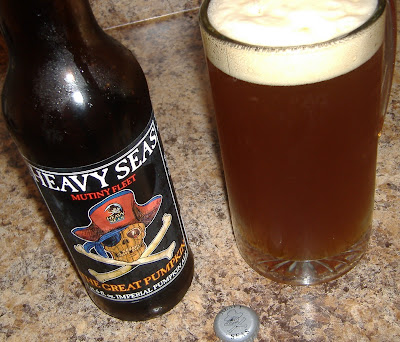 About: "The secret is in the 2.5 pounds of spice per barrel for this fall brew. We add the pumpkin during the mash at precisely the right time to create just the perfect balance of malt, hops, pumpkin and spice.

Best With:  As specialty beers are typically all made with flavor enhancing ingredients, foods with complimentary ingredients are generally an ideal match. For example, pumpkin beers pair well with spiced pumpkin pie, and chocolate beers tend to work well with chocolate based desserts."

Thoughts: It's their standard logo dude (skull and cross-bones) but pumpkinified (sic). Kinda looks like that evil little fucker from Trick 'r Treat. Digging the pirate theme, and well, you can't really go wrong with skulls and bones.


Poured the whole thing into my big ass mug and got a thick two finger head that was going nowhere fast. As it started to die down it never really faded away. Amber in color.

Hmm. I'm getting mostly nutmeg... and hints of pumpkin afterwards. Spices are of the standard sort.

Comes off very tart, kinda fruity. There's something strange about this one. I think I'll let it warm up some. *Some time later* Not too sweet, not too bitter. The cinnamon doesn't have a real kick to it, but it's a bit like black pepper. There's some mild clove too. This one is heavy on the flesh, heavy on the booze and light on other pumpkin spices that other companies so very often abuse with no regard to the drinker. Letting this brew warm up was a very good idea as the cold was masking what it had to offer.

A bit frothy, but goes down easy after a while once the spices warm up.

I'm getting a bitter peppery aftertaste, and it tastes a bit sweeter coming back up. That cinnamon with black pepper still seems the most prominent, along with the alcohol and pumpkin coming in second and third. I was expecting this one to be better than it was, but I'm not saying that in a negative way. For one of the more clove tasting brews, this one is on-par and worthy. The clove is so subtle though that it lets the other flavors shine and that's what I really like about this one.

Email ThisBlogThis!Share to TwitterShare to FacebookShare to Pinterest
What the... Heavy Seas, Pumpkin Beer