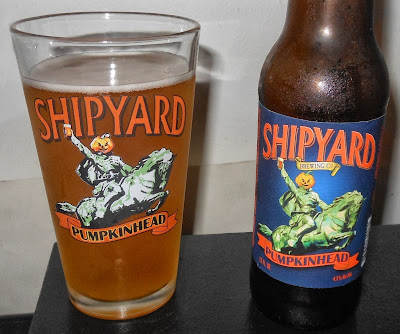 Thoughts: I dig the whole Headless Horseman dude on the label, but will I dig the beer?

Pumpkinhead poured a slightly cloudy yellow. Kinda looks like pee. Even though the head faded in less than a minute, there are a lot of rising bubbles in this, so it seems that there's some pretty decent carbonation.
Well if it smells like pee that's for me. I'm just kiddin'... smells like a watered down malt liquor mixed with natural ice with a little bit of creeping nutmeg and cinnamon. Huh, I guess I wasn't kiddin' after all.

Tastes pretty standard for a second then the flavor disappears and it's like a quick fading seltzer. It's weird too, because you can feel the spices when the brew fills your mouth, but when your brain goes to process it they run like hell. Not getting any of the pumpkin either. Wait, is there pumpkin in this? QUOTE: "To make Pumpkinhead, the brewery doesn't just toss some pumpkins into the brew kettle. The beer is made with a natural concentrated spiced pumpkin extract, which is added to a wheat beer during the brewing process." They don't toss pumpkins into the brew kettle? Well why the fuck not?!

Kinda foamy, and a little bit silky.
Aftertaste is pretty horrid. Not that I mind the taste of Natural Ice (I'm no snob when it comes to that beer - bring it on!) but I'm not intent on pouring concentrated pumpkin spice in the stuff. How is this beer so popular? I see frat boys and chicks buying it all the time. Oh wait, that explains it. Sorry Shipyard's Pumpkinhead "ale", but we're not going to be partying down anytime soon. Moving on.

Second Thoughts: TWO YEARS LATER. So a few weeks ago the really small divebar that I frequent got rid of their Budweiser on tap and replaced it with Shipyard Pumpkinhead, a drink that I consider to be the Bud Light of pumpkin beers. Bud Light is still on tap though, as are Coors Light, Heineken, and Sierra Nevada Pale Ale. SN Pale Ale took the place of Shock Top Raspberry Wheat which took the place of Miller Light I think. That particular tap line made a huge step up. It's cool that they have a real craft brew and a seasonal on tap now, but this place really only caters to Coors Light drinkers. Nobody ever drank Bud there, except for myself and a pal from work. Of course a pint of regular beers are $2.50 while SN is $3.25 and Pumpkinhead is $3.75. I got four pints of the Shipyard Pumpkinhead at $2.50 before the price was set on it. I also got it with Cinnamon and Sugar around the rim.

Shipyard Pumpkinhead is a piss yellow beer that smells like cinnamon, wheat and water. It actually smells OK at first, but gets worse as you start to drink it. The taste is watery as hell and the spices are really subtle, with cinnamon coming out on top of everything. There's no real pumpkin whatsoever and it just tastes really synthetic. It's pretty pathetic for a pumpkin beer, though it's probably the most popular pumpkin beer in the world. Considering Coors Light is more than likely the most consumed beer on the planet, that shouldn't surprise anyone. The cinnamon and sugar around the rim of the glass didn't do much to improve upon the beer itself, aside from giving me a distraction from the watery nature of it. And I don't think that a pumpkin beer should NEED to have this done to it in the first place. It should taste good enough on its own.

Tried this for the first time on tap at pumpkin beer shootout against UFO pumpkin. I preferred the UFO over Shipyard, but then they tapped Shock Top pumpkin when UFO ran out, and that was my winner for the night... at least out of the three pumpkin beers.