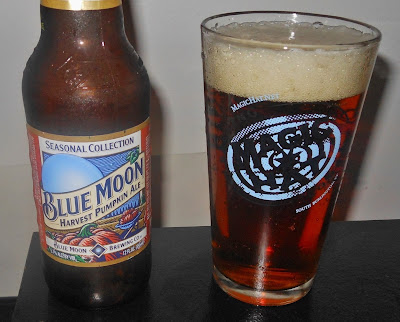 About: "In 1995, we crafted our first autumn seasonal - Pumpkin Ale. At the time, Oktoberfest beers were in high demand. For our version, we wanted to create a beer that was a little different than what was already out there and complemented the season by highlighting the flavors we’ve all grown to love during this time. It was so popular that it became the first nationally available pumpkin ale. Harvest Pumpkin Ale, as it’s called now, is crafted with pumpkin and spices of cinnamon, nutmeg, cloves, and allspice for a taste you’ll want to fall right into."

Thoughts: The seasonal colors along with their standard logo seem to mix well. It's deceptively eye-catching... which of course means trouble.

Pours out a dark, hazy orange. The head faded out nearly completely in a matter of seconds.
Kinda fruity, almost like cherries. That was me really, really trying to smell something here. Chopped firewood? Pits?

Wheat with hints of spice. It's not really spicy though, as there's no tickle or tingling. I'm kinda sensing something like gingerbread or apples with a little nutmeg. It's like my brain is trying to compensate for the lack of flavor here. Tastes really synthetic, and I'm not getting anything pumpkin at all. This is very bland and watered down tasting. Can this really be 5.7%? After all, if they lied about it being a pumpkin ale, what else are they lying about?

Very thin and watery.
Could have been much better, but it's like they didn't even give a fuck when this beer was made. It's a good thing they put beers like this in fancy packages and con people out of their cash, otherwise they'd be screwed and guys wouldn't get laid by chicks with no taste.

Couldn't agree more with you about how they "on people out of their cash". Blue Moon pretty much sucks in general. Their standard white ale is readily available, so people who enjoy this type of ale but don't know any better drink it instead of much better German and Belgium wit beers. And their seasonal brews are in a word awful.

I've never tried Pumpkin ale. After reading your blog, I've a real craving; may just have to seek some out.

Well whatever you do don't seek this one out... Go for Pumking, Wachusett, Cambridge, and Hopping Frog.