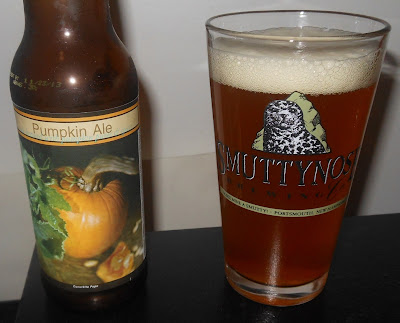 About: "Smuttynose Pumpkin Ale is our homage to the craft and heritage of America’s brewers. Recipes calling for the use of pumpkins in beer date back to early colonial times, when brewers sought to extend their supply of costly imported malt with locally grown ingredients, such as squash and “pompions.” In that spirit, we brew our ale with the addition of pumpkin to the mash, along with traditional spices to create a delicious American original. Malts: North American 2-Row, Carastan, C-60 / Bittering Hops: Cascade / Flavoring Hops: Cascade, Liberty / Other: Natural Pumpkin Puree, Cinnamon, Nutmeg and Cloves."

Thoughts: Notice it's not a drawing of a pumpkin, but instead an actual photograph of one. Like they're trying to tell us: "Hey, we use the real stuff in this!" Well... Long live the orange flesh!

Light amber in color. No real orange or red at all... a bit on the yellowy side.

First smell was pretty straight up hops and malts, and reminded me of a Pete's Wicked Ale for some reason... like of the first time I chugged three of those in a row. On the second smell I got some of that pumpkin. It's very light on the spices, like nothing at all spices. As it warms the smell is pretty much the same spice-wise, but a little more of the pumpkin puree comes out.

All the pumpkin taste and mild spice falls back when those heavier malts and hops hit. The pumpkin is very earthy and real. This isn't any synthetic extract bullshit. Oh, and it's not sweet, far from it! This stuff is bitter as a motherfuck! I stopped drinking about a fourth of the way through to let it warm up, as I do believe this may not be meant to be consumed while chilled. Yeah, still about the same. Allspice and cloves with some mash backup. Pretty sour.

Medium bodied. A bit fizzy when you're drinking it, but it drys you out fast.

I didn't really dig this one too much. Of the more clove flavored pumpkin ales this one will be going towards the bottom of that particular listing. It just doesn't have enough "oomph!" Definitely needs more pumpkin, and less cloves.

Second Thoughts: I notice that bottle has a stamp on it with a Best By date of 11/23/13 and even more surprising, an ABV stamp of 6.3%. Seeing as the ABV was never listed on this beer's label, and all info on it varied from website to website, it's about time they did this.

Poured a really hazy golden apricot color with a quick fizzling head. Taking a closer look at that haze and it's not cloudy, but rather there are tons of small grainy speckles all throughout the beer. Carbonation is very light.

Smells pretty weak. Is this a lager base? The first thing you get is water, it's very watery. It does smell recognizable as a pumpkin beer obviously, but mostly from the moderately spiced aqua. The scent is a little unexciting and hinting at a sour mash.

The taste fares a little better. Whatever canned pumpkin puree they glopped into their vats, it sure is a raw and unseasoned one. There's hardly any sugar or sweetness in this at all. Maybe some burnt brown sugar in the beginning, and those spices try as they may to cover up that bitterness, but it's not happenin'.

I gave it a big fat MEH last time and no surprise that I'm getting the same reaction from this year's bottle. This one is begging for cinnamon and sugar around the rim of the glass. That's a bad thing. It's got some personality though - clove overload is more like it - and at least it isn't as watery as it smells.

Email ThisBlogThis!Share to TwitterShare to FacebookShare to Pinterest
What the... New England Beer, Pumpkin Beer, Smuttynose

Never liked Smuttynose pumpkin until I had it on tap last year. Had it again this year in bottles and really enjoyed it. It's kind of like a pumpkin pale ale, and I guess I never got that before.