This is the first time I've tried this one (I think). The only other brew I've tried from Dogfish Head is their raunchy as hell 9.0% ABV 90 Minute IPA. I've gone back for that six pack about four or so times in my life, but will their Punk ale kick my ass? Let's find out... 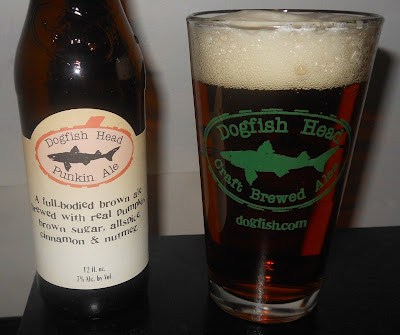 About: "A full-bodied brown ale with smooth hints of pumpkin and brown sugar. We brew our Punkin Ale with pumpkin meat, organic brown sugar and spices. As the season cools, this is the perfect beer to warm up with. Punkin Ale is named after the seriously off-centered southern Delaware extravaganza Punkin Chunkin (check out some of these Discovery Channel videos of Punkin Chunkin, you gotta see it to believe it!). In fact, Punkin Ale made its debut as it claimed first prize in the 1994 Punkin Chunkin Recipe Contest. Yes, that was a full 6 months before we even opened our doors for business!"

Thoughts: The label is very plain and unattractive, much like most all of their standard brew's labels. Aside from the orange six pack box, it's not very easy to tell that this is a pumpkin ale.

Punkin is a golden color with light shades of red, and many bubbles. It had a half finger head that took a while to go away (like always I tilted glass while pouring and then upright at end).

Smells bitter as fuck! Beyond that, this ale definitely smells garden fresh, fleshy with a hint of sprinkled brown sugar. It's as if some kids had gone around and thrashed all the pumpkins on their neighborhood doorsteps. I've walked the streets late Halloween nights as a loathsome teenager and this reminds me of that scented, cold air.

Tastes like it smells, which is pretty damn bitter to me. This isn't a sweet ale. It may be sweeter than other ales due to some of the ingredients, but this isn't a pumpkin pie brew. It's more of an allspice brown ale with subtle hints of flavors hidden beneath malty alcohol. I took a little time with this twelve ounce bottle because I was unsure what to think at first. I wasn't really getting much pumpkin in the beginning, mostly the allspice and even perhaps some molasses. But I noticed that the ale got a a lot better as it warmed up and that pumpkin really came out in the taste. I would suggest drinking this one at just below room temperature, and not chilled.

Fizzy, and it left me with a bit of dry mouth. Medium carbonation.

Every burp after I finished this off I could taste lightly roasted pumpkin seeds (which was nice - I guess that's where the pumpkin was hiding) and that made me feel a little bit cheeky. The aftertaste was a bit on the green beans side too.

Email ThisBlogThis!Share to TwitterShare to FacebookShare to Pinterest
What the... Dogfish Head, Pumpkin Beer

One of my favorite pumpkin brews. I feel that it's gotten more bitter over the years. Now that's not a bad thing, considering how many sweet pumpkin pie flavored beers have popped up.