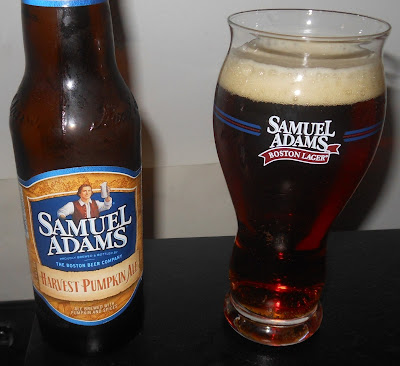 Packaging: Beautiful colors, but that's about it.


Appearance: Noticeably darker than the UFO and Shock Top I had just tried the day before. Ruby colored, like red water. It's even darkish while held in front of a light. There's a lot of bubbles at first that faded away and left pretty much nothing but the odd couple of carbonation bubbles rising upward.

Aroma: Smells mildly sweet, nothing really surprising that will pop your eyes out of yer skull, but just inviting enough. Cinnamon and brown sugar mostly, and little bit of allspice and pumpkin spice. It's like a pumpkin pie that's cooled for most of the day if you lean in close.

Taste: A little more pumpkin taste than I was expecting, but still, not too much. Hints of roasted almonds, and some graham cracker. Not really tasting the sweetness (which is nice), but all of a sudden the cinnamon starts really kicking in at the end. And it's peppery too. Very spicy, and tingling my upper lip a bit. This brew is kind of abrasive, and I don't know if has the right to be with only a 5.7 abv.

Mouth-feel: Thick and slow to move down the tongue, but leaves you dry after a while. It doesn't feel like a light beer I'll tell you that.

Finish and Overall: Mixed bag. Smells and taste good enough for a short while, but perhaps it's the aftertaste that ruins things. This brew confuses after the sweeter smell, but then the spices linger far longer than you think they would. When the malt and pumpkin flavor fade away, you're left licking the roof of your mouth to get that cinnamon pepper off.

Note:  I've read that Samuel Adams now makes a Double Pumpkin Ale that's at an 8.0 abv, but apparently it's only available in kegs, or on tap at very few pubs. I can't really find any information on it (it's not even on their own website), only the logo and four bars in NY that claim to offer 16 oz drafts for $5.50. Shame as I was hoping to try what most surely be a superior version of this ale.

Email ThisBlogThis!Share to TwitterShare to FacebookShare to Pinterest
What the... Pumpkin Beer, Samuel Adams

I kinda like the Sam pumpkin, but I would love to try this double pumpkin pumpkin. I will seek it out and report back...