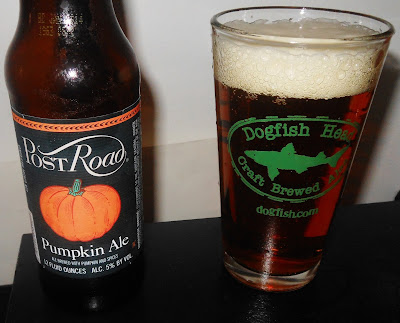 About: "Early American colonialists, seeking natural ingredients for brewing ales, turned to pumpkins, which were plentiful, flavorful and nutritious. Blended with barley malt, pumpkins became a commonly used beer ingredient. Post Road Pumpkin Ale brings back this tasty tradition. Hundreds of pounds of pumpkins are blended into the mash of each batch, creating a beer with an orange amber color, warm pumpkin aroma, biscuity malt center, and crisp finish."

Thoughts:  Not really digging that flowy font, but it's black and orange and got a drawing of a big ol' pumpkin on it. Looks like it's ready to burst too.


A standard amber with shades of orange. There's light carbonation and the head faded quickly.
Bitter citrus. It's very malty and I'm only getting hints of the spices. It's not strong smelling at all. I almost gotta put my whole face in the glass to get anything. Maybe some allspice and nutmeg.

I'm gettin' nothing but cloves and barley. Very, very bitter and earthy tasting, kind of like dirt. I'm all for bitter too, but dark lord... this one could really use some sweetening up. If this bottle didn't have a picture of a pumpkin on the label I might not even have noticed it was pumpkin ale. Maybe that's why they made the image stand out so much. Never thought I would say that either, as I have become a bit annoyed at how much cinnamon is used in some of these ales, but this one desperately needs it, or something else to calm the utterly dominating hops.

Light but not watery, fizzy and smooth. I was left feeling pretty dry. I feel like I just drank smoke. It's weird. This smells and tastes way too boozy for such a low ABV, has no outstanding flavors(aside from bitter) and does not impress me.
They should have a big picture of cloves on the label for this. I'm hesitant to rate this lower than I should because it's so raw and I like that. It's not a pumpkin pie beer, but I'm just not getting enough pumpkin here to make up for the extremely bitter taste. It's most certainly flawed, and I may have enjoyed this more if it were a 9.0%.

I've enjoyed this brew from Brooklyn in the past. In fact this may be the first pumpkin beer I ever tried, many years ago. Haven't had it yet this year, but sounds like it's a bit off.