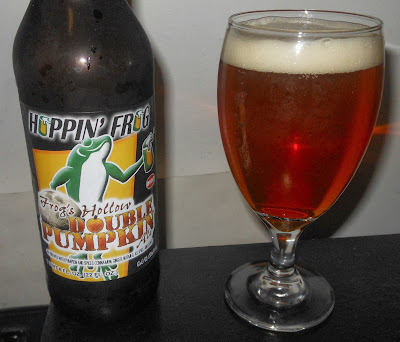 About: "There’s a place just south they call Frog’s Hollow, brewin’ pumpkin ale in Fall, and they only speak in whispers of the name. There’s a lady they say who has the secret, of spices picked just right. With a crying shout, she’ll knock it out, and hand you the Frog’s delight."

Thoughts: I love frogs, and this frog is one cool dude. He looks pretty much the same on all their labels holding up different colored beers, with a few exceptions like the one where's he's wearing sunglasses or has an afro. But the one of him in the Santa hat for their "Frosted Frog Christmas Ale" has me really looking forward to December. I want to try it bad.

Poured out a lighter shade of very orangy orange. The dark head was slower than usual to build up even with an aggressive pour, but it lasted a minute.

Smells like boiled frog! Ahhhh, I'm just fuckin' with ya... It smells like sweet, sweet pumpkin pie fresh out of the oven and just cut up.

This brew is hoppy as fuck. Get it?! Hop! Like a frog duz... I got hit with high alcohol first and a super fast rush of cinnamon that eventually subdued and allowed the tasty pumpkin to creep in. The lingering hints of the allspice, nutmeg, cloves and ginger seem to all be in equal amounts, and none of them overpower the others. I can taste it go back and forth between allspice and nutmeg with the cloves and ginger following things up after I swallow and smack the lips together. After a while and a few gulps the bite of the alcohol died down a little. There's some great buttery squash as things start to warm up.

Thick and creamy, just like my ex-girlfriend. Carbonation seems pretty minimal, even though I'm using my new Samuel Adams glass with a laser etched ring at the bottom.

I'm feelin' pretty good and I still have a third of a bottle which I'm about to pour and finish writing this. I don't have a fire erupting in my belly, but rather a gentle smoldering that's making me grin like a dumbass. This ale is pretty damn spicy though, I wouldn't mind the spices held back about twenty percent or so with a bit more raw pumpkin thrown in but I'm not complaining as this one is still pretty sweet. Headed towards the top of the charts, too.

This Ale won the Gold Medal at the Great American Beer Festival in 2010, in 'Category 4: Field Beer', beating out 27 other entries including Elysian Brewing Co.'s Dark o' the Moon (Silver) and Weyerbacher's Imperial Pumpkin Ale (Bronze).

Email ThisBlogThis!Share to TwitterShare to FacebookShare to Pinterest
What the... Hoppin' Frog, Pumpkin Beer

I tried this one last year at a beer festival and really enjoyed it. I wound up getting a bottle too. I think I passed this year because of all of the other bombers of pumpkin beer I bought, but may have to pick one up if there's any left next time.