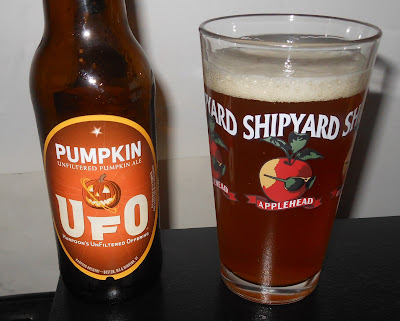 About: "Imagine a pumpkin vine wound its way in a field of barley, and a brewer harvested it all to make a beer. Add Northwestern hops and a blend of spices, and you've got UFO Pumpkin. The malt combination provides a smooth body and slightly sweet flavor, which balances perfectly with the earthy notes derived from the pure pumpkin. And like all of our UFO beers, UFO Pumpkin is unfiltered so all the wonderful flavors are right there in your glass. Cheers!"

Thoughts: I really like the artwork on this. It's great. The orange in the background darkens around the corners, leaving focus on this crazy pumpkin seemingly floating in space. The oval shape of the sticker along with the vibrant colors really make it stand out.

Hmm... There's not much of a scent. It's very faint, definitely not the same impact as the others I've tried. I'm getting some sweet spices that seem far away (maybe someone down the street just baked a pie) but nothing is really standing out.

This one is pretty average, tasting like a regular lager or light beer with a hint of soft spices thrown in. I was excited too, by the artwork, and the fact that it says unfiltered twice on the logo. It's smooth and sweet like their ad states, but this one is pretty unremarkable and rather lacking. Yep, this one is for the girlfriends.

Perhaps Harpoon should have filtered a little bit more flavor into this one. Har har! Now, this isn't horribly bland, but those expecting something special edition will be seriously let down. If you're down for the Plain Jane standard stuff though (which Pumpkin Ale probably shouldn't be), this will do. This of course is bound to happen when trying all different sorts of specialty ales, as there's always something for everyone on the other end of the spectrum.

Second Thoughts: "Best by 12/15/13". I wonder if this one was brewed in MA or VT... and I then ponder, does it fucking matter? UFO Pumpkin pours a very foggy amber orange with lots of carbonation and a one finger fizzy white head.

Smells really plain. Malty. Biscuity. A little bit of spice that really adds to the scent but seems light, although it's always there. Little bit of nutmeg, cinnamon, raisin bread... vanilla and pumpkin extracts?

Taste is pretty sweet upon first impact. Then you can taste the water. It's got a cute little rush that comes with each swig, but overall it's a pretty bland beer base. Loads of cinnamon dries out the mouth instantly and there's not really much of an aftertaste here aside from simultaneous water and dryness.

I'm going to experiment by dumping a shot of Dr McGillicudy's Apple Pie liquor into the last half of this and see where it takes it. Hmm... well that didn't help much. Not only does this beer totally ruin the awesomeness that is these apple pie nips, but the liquor completely flattened the beer. Bleh. Makes me wonder if anything could make this stuff taste better?

Had this on tap and in the bottle, but liked it on tap much better. More of the pumpkin pie flavor came through on tap than in the bottle. I'm not a huge wheat beer fan in general, but the pumpkin wheat idea isn't bad. Have you tried Shock Top pumpkin yet? Interested to see how you compare the two.

It's weird that you should mention it... because I just drank that last night! I'll be posting on it in the morning, though, I'm a bit "on the fence" about comparing the two. They seem a bit similar to me.