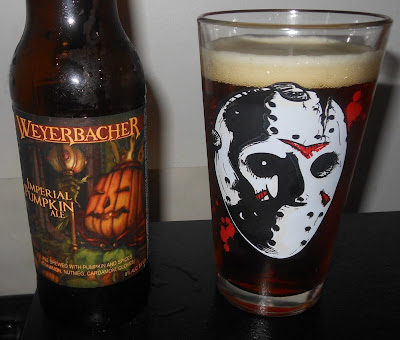 About: "Like a pyramid for a pharaoh, we set out to make a bold monument for The King of the Pumpkins! This 8.0% ABV pumpkin ale is the mother of all pumpkin ales. It is heartier, spicier, and more “caramelly” and “pumpkiny” than its faint brethren! We have added lots of pumpkin along with cinnamon, nutmeg and a touch of cardamom and clove giving this beer a spicy, full-bodied flavor. This truly is an Imperial Pumpkin Ale. Perfect finisher on a cool autumn night, or match it up with a slice of pumpkin pie and fresh whipped cream."

Thoughts: This artwork is one of the most awesome of all the pumpkin ales. This Pumpkin King is one magnificent bastard! Cool shit, mister. Also, this Ale won the Bronze Medal at the 2010 Great American Beer Festival in the 'Field Beer' Category.

Copper, just like a penny. And the tan colored head is about the equivalent of one too, gone in an instant.

I'm immediately hit with the scent of sweet cloves, reminiscent of Djarum cigarettes. I remember them fondly, and smelling this makes me think I should pick up another pack for old time's sake. There are hints of nutmeg and a dash of cinnamon.Yeah, this one smells pretty sweet and spicy. I wonder how it tastes...

Burnt coffee grounds, first of all. What the hell is this!? The difference between the smell of this and the taste is just absurd. Stale clove cigs, dipped in allspice. I don't recall ever having cardamom, but I hope it tastes better than this. This Imperial tastes like some funky caramel candy that's been stepped on by a coal miner.

It's foamy, feels thick (yet goes down like it's thin) and stays on the tongue. Why it's this foamy in my mouth without too much carbonation seems rather strange. After a while it's like I just french kissed my ex girlfriend back in '95 all over again. She was a butt fiend. And maybe that sounded wrong.

Sticky, smokey, and like I took a fork and knife to my boot. It's funny how smelling this is like running a fresh clove cigarette across your nostrils, and yet the taste is like you just lit up one that's already been half smoked the day before.

I don't really either love, nor do I hate this ale, despite however you may interpret my review. But I suppose it will be interesting to see where it fits along with the others in my graded summary. I've still got six other pumpkin ales to go from the batch I picked up, and I'll be grabbing more the end of the week.

Email ThisBlogThis!Share to TwitterShare to FacebookShare to Pinterest
What the... Pumpkin Beer, Sinister Beer Labels, Weyerbacher

Interesting review. I've looked forward to this clove flavored brew for the past few Falls. I agree completely about the aroma, but can't say the same for the taste. I'm only had it on tap so far this year, but didn't get any burnt or boot flavors.

I still enjoyed it. By boot flavor though I didn't mean rubbery, more like licking the inside of Joan Jett's tight leather pants after one of her concerts. ;)

I had a bottle of this year's batch last night and didn't get any of the burnt taste. There is definitely some caramel malt flavor going on. I really like this ale, especially how drinkable it is for 8% ABV. Has less alcohol taste/warmth than the Dogfish Punkin, at 1% higher ABV... must be the extra spices or essence of Joan.