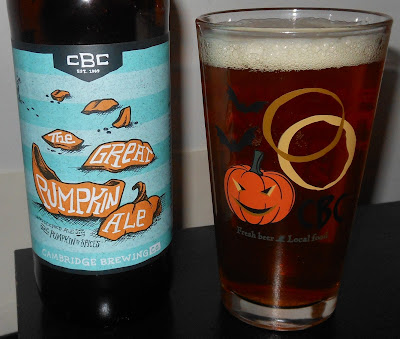 About: "New England’s first pumpkin ale is finally in a bottle. Made with fresh MA organic sugar pumpkins and organic MA malt, real pumpkin flavor is complemented by just a touch of spice. All hail the original Great Pumpkin!"

Thoughts: I didn't even notice the guy with the axe walking away from that destroyed pumpkin whistling a guilty tune. I love the colors on this. I'm not really down with stripes (aside from Freddy) but this artwork is pretty killer. I wouldn't mind a poster of it actually. It's also pretty cool that they put the batch number and when it was bottled on the side. I think I'll show that off here. Their website states that this is the first time the ale has been bottled in the 22 years of its existence.

Whiter than usual head that fades fairly fast but doesn't completely disappear. Minimal carbonation. It's a bit of a darkish orange with a little bit of amber.

Smells really good. Hit first with a lot of caramel... smells of sugar and brown sugar. It's a little smokey and fleshy at the same time.

Very earthy. Not terribly over-spiced, but I'm getting some pepper. It's not strong and there's no kick to it, but it tastes pretty damn good. Nothing synthetic or generic here. It's a little malty and rich with the pumpkin. This is one damn fine ale. For a Light Ale with a lower ABV than many of the others, it still manages to obliterate them taste wise.

It's a bit watery with a slight foaming. Tingles the tongue but doesn't abuse the mouth. Leaves behind no film and doesn't dry you out.

Such a minimal bitter aftertaste. It may not be as thick as I would have liked, but this one doesn't cop out on the taste with cheap ass ingredients. It's nice to see a light pumpkin ale in a bomber bottle that kicks the ass of its brethren. This one really does deserve to be in a tall standing bottle all its own. Nice work.

Second Thoughts: I reviewed the first bottling of this beer last year, and this bottle is from the third batch. I wonder what happened to batch #2? Hmmm...

Holding this beer in front of this white screen the color is a pretty light orange, shades of yellow, slightly amber even. There's loads of carbonation and the beer itself is pretty clean looking. The stark white head faded in about a minute's time, but left a thin layer with some black bubbles on top.

The scent is very earthy pumpkin with brown sugar and a hint of mild Belgian style yeast. It smells sweet, but not overly sweet, and just a tad spicy.

The taste is very raw pumpkin, slightly tart, with lots of pepper up front and soft tingling spices on the tongue just after the swallow. With that tingling after a while, it's as if you can feel the sugar dancing around in your mouth. Despite nothing be to up front or overpowering, there's a ton of flavor presented here. It's not weak, despite not being as sugary or spicy as others and having a rather low ABV, but believe me when I tell you that this tastes pretty damn good. If something like Pumking is too strong for you, and cinnamon/clove bombs aren't your thing, but you're looking for a worthwhile pumpkin ale, then this is the perfect beer in those regards. Very little bitterness on the end.

I'm satisfied with purchasing this one again. It's one of my favorite pumpkin ales out there, near the top for sure, but on top in its own way.

SheReads said...
This comment has been removed by the author.
October 13, 2011

***Edited because I must be drunk on your beer, 'cause I spelled it wrong, LOL!

Awesome label. Too bad it's another great sounding beer that I haven't found yet. I will be on the lookout though.