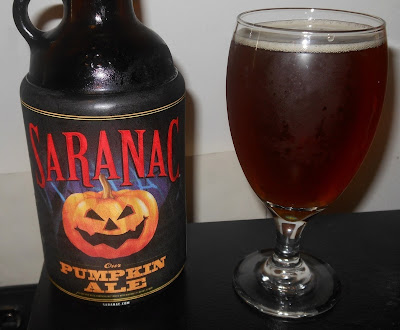 
Thoughts: There is no denying that when you look at this bottle you immediately think of Halloween. The design is pretty simple and would look a lot better with some additional details on the pumpkin.

It's not as orangy as the others. This one looks a bit more brownish, almost coppery. The head built up quick and then bamf! was gone in a flash.

All the usual suspects are there, but they're being subdued in the mix. Like the spices are drowning but keep coming up for air. And it's hard to make out, but I'm getting kinda like funky week old cinnamon rolls.

Bread. Malt. Nutmeg with low levels of cinnamon, but I'm not getting the huge pumpkin flavor that I desire. Maybe I'm just not one for spice balance when it comes to pumpkin ale. I either want full on pumpkin flavor or the horribly over-sweetened pie. I'm finding that I'm not really a down the middle guy with this shit. The flavor however isn't lacking.

Medium body. Bubbles and fizz attack your tongue but the coating inside the mouth isn't thick or weighing. Drying afterwards.
Decent aftertaste. It's hard when the tongue goes from bitter to spice filled and then back again. Is that what balanced is? Or is my tongue just confused? It's not weak or watery, and it's a little different, but it could be better.

Second Thoughts: First off, I couldn't pass up this 32 oz mini-growler with a Jack-O-Lantern on it. You nuts? Also, it's been a year since I've last had this beer (and having reviewed 30 Pumpkin Ales as of this writing, about half of them pretty shite mind you), I wanted to see how it holds up to my newly acquired knowledge of tasting.

So what do I think of this one a year later you don't ask? After trying so many pumpkin ales and coming back to this one, I find that Saranac's version of our seasonal favorite is a very flavorful, spicy and great seasonable representation of the style. This beer is jumping out at you in every way possible. It's all around spicy, bursting with intense flavor and best of all, it doesn't fade out on you.

I remembered this one as being a clove driven brew, and it still kinda is, but the other spices are really coming out as well (especially this time around). It seems a little fresher, and the cinnamon / nutmeg blend is outstanding. This beer isn't weak. It ain't no watered down bullshit pumpkin beer. And that's a great thing. I'd say that it deserves to be in growler form.

While it doesn't have that boozy warmth that I enjoy with stronger Pumpkin Ales, this one doesn't lack in the flavor department. It's heavy. I've since gotten used to the "standard" (non-imperial) pumpkin beer taste, and man, there are a lot of fluctuating representations out there. So many weak brews and so many just plain fowl brews out there... not this one. It's still not the greatest thing out there, but as far as standard pumpkin brews goes it near the top of that list.

Email ThisBlogThis!Share to TwitterShare to FacebookShare to Pinterest
What the... Double Vision, Pumpkin Beer, Saranac

Your tongue isn't confused, my friend. I think you're on the mark here. Saranac's pumpkin is a good middle of the road beer, like most of their beers. They're a good craft brewery who's beers are pretty easily accessible and decently priced. I do dig their Halloween packaging though. Reminds me of Silver Shamrock. ;)

Thanks for the suggestion. I'll look for it. If I had seen it at the store I would have already picked it up but it seems I may have to search this one out. Their Four+ Series looks interesting.

As for the rest of the pumpkin beers, I've got twelve left to try out and post on (that is if I don't buy more), then I'll probably move on to some Oktoberfest and other beers.

Also, I'll be posting a big pumpkin beer summary with all of what I've tried, listed in order of how much I enjoyed them all once I'm done. Then you can let me know if you think I ordered them properly.

If it's cool with you, I may post a list too... at least of the pumpkin beers that I've tried. It'll be interesting to see how we each rank them.

Yeah of course. I actually read your post on pumpkin ales last year and remembered it when I went to that tasting a few weeks back. All the ales and beers they were sampling were autumn seasonals.

I'm kicking myself now for not buying one at the time to get a freebie glass. They had this tall shock top pumpkin glass that was beautiful. I'll link to your posts in my final review.