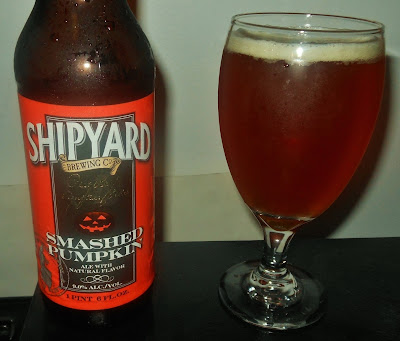 About: "Smashed Pumpkin is a big-bodied beer with a light coppery orange color and pleasing aroma of pumpkin and nutmeg. The OG and final Alc./Vol. provide the structure and body. Pale Ale, Wheat and Light Munich Malts combine with the natural tannin in pumpkin and the delicate spiciness of Willamette and Hallertau Hops to balance the sweetness of the fruit. To fully enjoy all the flavors, this ale is best drunk at 55 degrees Fahrenheit. Smashed Pumpkin pairs well with sharp cheeses, nuts, lamb, hearty stews and desserts like flan or pumpkin pie. Chefs find this an excellent beer to cook with in dishes such as braised short ribs."

Thoughts: Take a look at that absolutely beautiful packaging. This label is very classy, well done and the gold foil lettering is a great touch that really makes it stand out.

Big foamy bubbles that fade in a bout a minute and a half. Golden orange, just like a pumpkin. Not getting too many carbonation bubbles rising up, which is strange as I had expected there would be more.
Nose isn't too sweet, but damn those spices really hit, and you can tell it's going to have a bite to it. Nutmeg and ginger notes. Smells slightly similar to their Pumpkinhead, only taken to the next level. Way to the next level.

Alright, I've been looking forward to this one. Smashed is heavy on the booze factor which I like. You get all of the spices at the start of every gulp and then you're hit with bitter clove, then caramel-like nutmeg. This one isn't too sweet, and the taste maintains itself very well. It doesn't get any worse once you start getting through it like their other pumpkin brew does. I'm drinking mine very chilled by the way. I left about a fourth of it in the bottle to warm up to room temperature. Not as much dirty pumpkin as I would have hoped, but it's definitely out there, and a major step up from their best seller.

Feels good, man. There's a little tingling in the back of my throat. This brew gives off a sweet and relaxing warmth in the stomach. It's pretty smooth at first, but it gets frothy as hell, then tingly. Getting some extremely frothy belches out of this which aren't too pleasing, but at least the aftertaste isn't horrible. I've yet to try any of Shipyard's non-pumpkin brews, but I would say do away with the Pumpkinhead Ale and stick with making this one. Of course their Pumpkinhead is so ridiculously popular around here despite being below average, that it'll never happen. Bottom line, if you're going to buy anything from Shipyard like say, ever, get the Smashed Pumpkin.

Second Thoughts: It's been nearly two years since I first had this beer. It was one of the first ten I ever reviewed. I remember liking it and hating its little brother Pumpkinhead the abomination. Last year I didn't go near it, but this year I decided what the hell. This is one of the first pumpkin beers out in the "season". I'm quite skeptical to whether or not Shipyard has cases of this from two years ago just wasting away in their warehouse and I'm really just drinking the same beer again.

Bottlecap let out a loud hiss. Smells pretty damn good. It's like a decent quality pumpkin pie slice. It's got all the usual suspects but something strange is coming through on the back end of it all. The malt and hop profiles shine through beyond the spice, and it's a little boozy, but I like boozy and that booziness really mixes well with the pumpkin spice.

It's very sweet up front, spicy and full of pumpkiny goodness, then immediately after the swallow a messy slap of hazy bitter booze comes through and well - doesn't' quite ruin things - but puts a little damper on it all. The hops really come on strong, not that there's anything wrong with that, but combined with that not-so-subtlety hidden booze it doesn't quite make for the ultimate pumpkin pie experience. Still, it is a heavy beer and there's a lot to be admired about this one. It's sweet, spicy, harsh, uneven, beautiful and ugly all at the same time. It's flawed but in a very good way. I still say that from what I've tried, this is Shipyard's best beer.

What really saves this beer from being "messy" is the thick bready feel to it. It's like a meal in itself. It gets a little sour after a while, but that's all in the aftertaste. Overall it's what's to be expected from any standard pumpkin beer as far as I'm concerned. It's heavy hitting, spicy up front, the spices linger, it's got the "right taste" for a pumpkin brew, and it's savory. The only problem is that there's this underlying weirdness to the whole thing, like a certain part of it didn't get properly integrated into the beer and was left a harsh semi-sour muddy grassness.

I've had a bottle of this in my fridge for a couple of weeks. Been saving it for the end of my pumpkin beer cycle, because I've heard some mixed things. But now I'm really looking forward to drinking it.

Tried the Smashed Pumpkin last night, and was not too pleased. I got a very strange aroma from this brew. Some spices, but something else that was almost like a chemical or something that doesn't belong in beer. The taste wasn't very pumpkiny or spicy. I thought the alcohol flavor really overwhelmed everything else. I don't think I'll be buying Shipyard's pumpkin beers again next year.