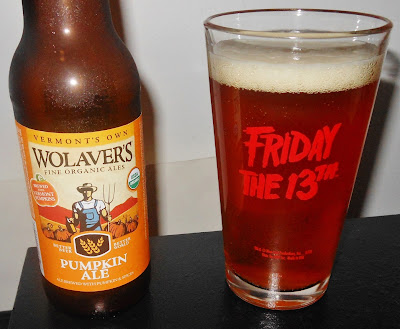 About: "This pumpkin ale is brewed with organic pumpkins grown by Will and Judy Stevens, of Golden Russet Farm in Shoreham, VT, less than 15 miles away from our brewery. They have been growing organic vegetables and flowers for more than 25 years. Using local, organic ingredients whenever possible and supporting local farmers is just one of the many ways that we strive to minimize our impact on the environment. The subtle flavor of pumpkin and mild notes of spice enhance this golden amber ale, making it a perfect choice for the season."


Thoughts: Their creepy faceless harvester is standing in a pumpkin patch this time around. Usually when I see a guy holding an open container and a pitchfork I get the hell out of Dodge, but I still stuck around to try this one out.

Pours a light amber with shades of orange, and a somewhat dark frothy head that fades fast.

Now that's more like it! I was hit with a major dose of pumpkin followed by warm pumpkin pie. This smells damn good.

Straight off, putting a lot of the other so-called pumpkin ales to shame. You get hit with the spice up front, then the pumpkin flavor consumes the palate, and then the lingering hints of spice bounce around in your mouth at the end. The little bit of clove isn't overbearing, and the brew simply put, tastes good. A fine, fine ale.

Very drinkable. Everything blends perfectly and it's so well balanced. The spice and the bitter even each other out. It's not strong, but it's not weak. Perhaps slightly watery, but that doesn't matter at all since it tastes awesome and is smooth as hell. I don't really have an opinion on the whole Organic aspect of this one, other than it tastes like they really care about their beer and the price wasn't higher than normal.

Second Thoughts: Wolaver's poured a cloudy amber orange with an off white head that fizzled away fast.

I just had a Post Road and a Smutty's and this smells a hell of a lot better than both of those. Still as a sessionable I find it a bit on the lighter side.. It's mellow, but a lot sweeter and that raw pumpkin in a little subdued. Spices are low and droning, but it's sugary.

It's a mild one, but tasty nonetheless. It's good. It tastes real. The balance is nicely done. You get a little bit of everything in there, and it's well rounded. Everything from the spices to the pumpkin flesh to the sweetness to the slight sourness all make their rounds. It's pretty cool how all around well done this one is. Though, it still leaves something to be desired. It's just not strong enough. For a non-imperial pumpkin ale this one is fantastic. Though still a little watery and not over the top, it's heads above a lot of the other guys.

I would love for them to make a strong version of this. I'm sure it would kick some major ass!

Email ThisBlogThis!Share to TwitterShare to FacebookShare to Pinterest
What the... Double Vision, Pumpkin Beer, Wolavers

I enjoyed this pumpkin ale too. And totally agree that organic or not, they just make a good beer at a decent price.