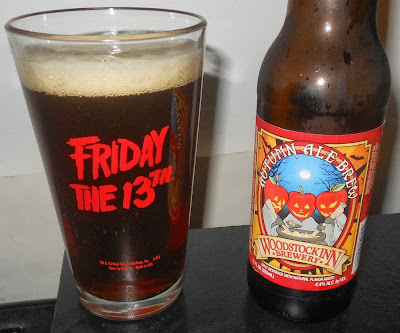 Thoughts: Three pumpkin (sorry, apple) headed ghouls in robes surrounding a cauldron of alcohol under a full moon in the blue night's sky. Fucking... awesome! Then there's the bats and the splatter effects. It screams delicious mischief in a bottle.

Loads of apple cinnamon, but it still tastes enough like a brew to satisfy. This malt beverage is strange, but damn is it good. Taste changes from candy apple to cinnamon rolls to bitter cider and back again. I wonder how this would fare in a higher ABV%? Wonder indeed... get on that shit Woodstock Inn. I demand a High Gravity Bomber of this!

I'm impressed. I was weary at first when I read that it was brewed and bottled by Shipyard. And secondly, when I noticed that this isn't technically a pumpkin beer. But I'll be damned if this one isn't superior to a few other so-called pumpkin beers I've recently tried. If I ever decide to drink a pumpkin beer that isn't a pumpkin beer, this will be my choice.

Interesting sounding beer. I haven't seen this one around, though the label would certainly catch my eye if. I like the candy apple idea, and the color looks amazing. Glad to hear it's better than the other Shipyard autumn offerings.