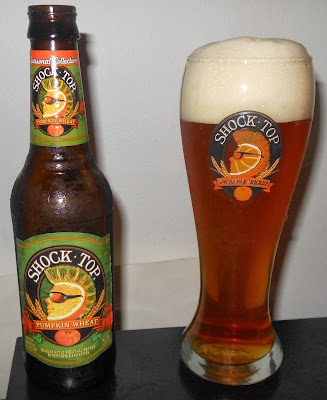 About: "Shock Top Pumpkin Wheat is a traditional Belgian-style wheat ale brewed with ripe pumpkins and a variety of autumnal spices, including nutmeg, cinnamon and cloves, for a refreshingly smooth beer that fully captures all the flavors of fall."

Thoughts: The artwork is a variation on their original logo and it works quite well, especially when you look at all three side by side and notice all the neat little differences. The colors are festive and spot on for the season.

Cloudy and orange, like honey mixed with water and tea leaves. The head was very bubbly at first, but after about a minute it was never to be seen again.

The brew pretty smells light, and isn't really all that stimulating to the senses. I'm getting a little bit of the wheat, while the other ingredients are lingering about. There's a very mild, slightly citrus whiff.

Yeah, this one is pretty middle ground. It's not too sweet and not at all bitter, but it starts to get a little sour after a while. Kind of metallic too. I'd say this is just about on par with Harpoon's UFO, and I really wish I would have tried them back to back to back to see just which one is the least interesting. Not that this tastes bad at all (the light wheat flavor gives it a bit of an advantage), but it's nothing to be excited about. It's still just a slightly spiced up chaser and not anything stand-alone.

Very watery, but it leaves a mysterious feeling. Synthetic?

I much prefer their Raspberry over this. One thing that Shock Top has going for 'em is their logo dude there. He is one cool guy, and not that I've gotta tell you, but  I've always had a fondness for sunglasses on weird fruit and veggie characters / mascots. Great artwork and design by these guys (very appealing - no pun)... hopefully they'll improve on their recipes though.

Email ThisBlogThis!Share to TwitterShare to FacebookShare to Pinterest
What the... Matching Glass, Pumpkin Beer, Shock Top

Weird, man. I'd agree that the two pumpkin wheats are on par, but personally I liked Shock Tops better. It's a better representation of a wheal beer, in my opinion. I think UFO had more of a pumpkin spice flavor that took away from the wheat flavor. And yeah, their raspberry is a better tasting beer.

When I arrange then later by which ones I liked the best I'm sure Shock Top will be in the spot right above Harpoon due to the wheat factor (which I oddly forgot to mention).