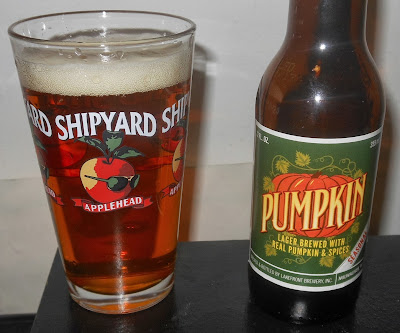 About: "In 1989, Lakefront Brewery owner, Russ Klisch was reading dusty brewing tome, tipping one of our fine lagers and came across a beer recipe that Thomas Jefferson had brewed with pumpkin at his home in Monticello." And? "Serve our Pumpkin Lager with holiday meals. The spice characters really bring out the depth of full-flavored meats and vegetables."

Thoughts: Well you definitely know that it's pumpkin by the huge arse letters there... but why does it say "Lager Beer" underneath that? Hmm... Well, this was one of the first pumpkin brews that I purchased. Why it took me so long to get around to it I don't know why, but it's probably due to lack of some cutesy name or awe inspiring art. Not to say that the label looks horrible.


Like a hazy tangerine, with yellowish shades in the light. Good luck seeing through the glass after you pour your beer, because it's impossible. Nice! And wow, there was no head at all on this one, it faded as I was pouring it... that's a bid strange. A no-head brew that you can't see through? Should I drink this, or drink this?

Vanilla, ginger and cinnamon. Pretty damn spicy on the tongue which makes it hard to get the flavors right away. I'm not really blown away by this, but it beats quite a few of those other beers I have tried so far. It actually tastes pretty decent but getting past those peppery spices is a bit of a feat. Tone it down a notch and it'd be spectacular.

A little thicker than usual, not by much, and it's attacking my tongue.

There's really nothing that made me dislike this one at all, but nothing that really made it stand out too much (other than how weak some of its competitors are). I'd say that this one is pretty average, and by average I mean it's a flawed yet solid starting point at what a good pumpkin beer should taste like. Anything below this just shouldn't exist at a price range.

I want to try this one again because it was just all over the place, yet tasted good, and after all nonsense it still tasted good. NOTE: Looks the the 2013 version has been filtered.

Email ThisBlogThis!Share to TwitterShare to FacebookShare to Pinterest
What the... Hybrid Beer, Pumpkin Beer

I haven't had a pumpkin lager, but would like to try one. And this sounds like a decent candidate.