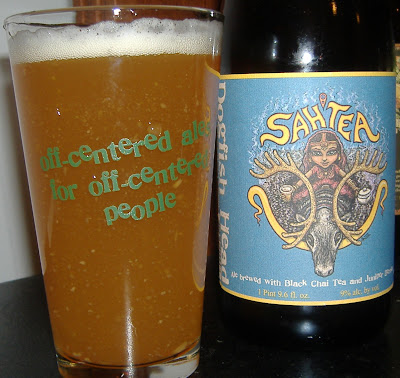 About: "A modern update on a 9th century Finnish proto-beer. Brewed with rye, we caramelize the wort with white hot river rocks, then ferment it with a German Weizen yeast. In addition to juniper berries foraged directly from the Finnish country-side we added a sort of tea made with black tea, cardamom, cinnamon, ginger, cloves, and black pepper."

Thoughts: Ultra light, yellowish amber with tea leaves(?) floating in time. There is stuff floating all throughout my beer. Huh. Is that sediment? I'm not quite sure (it's not on their list of Bottle Conditioned brews)... it could be tea leaves and bits of juniper berries? All I know is that it is not moving through the beer. It's in suspended animation, like bits of fruit in a jello. Crazy stuff.

Got some citrus as I was pouring. This is one of the most unique brews I've ever smelt. Strong tea and a little gin. Cinnamon, loads of Ginger, cloves and some pepper. There's that cardamom again. I had it in one other beer recently and there was something strange about it, but I remember this scent so that must be it.

It's a little lemony at first. Spices don't overwhelm at all, but it's got a taste that doesn't diminish at all either. It's very sweet, and a bit medicinal. Getting a lot of Rye as the main backdrop. Yeasty. Finish is woodsy and smokey. Little bit chalky. When I breath in I'm getting some banana as well. The spices and taste get more pronounced once it starts to warm. Also, the tinge of the alcohol that was hidden by the cold now starts to coat the mouth after each gulp, but wow it sure is subdued for a 9%. Everything is very well balanced and it's unlike anything I've ever tried.

It's a Sweet and Sour ale with more of a sweetness than sour, that isn't too intense, and one which I could see pleasing most specialty beer drinkers out there. My little girl spit it out, but hell, she's got no taste whatsoever. I'm very pleased that I tried this brew. It's most interesting, and I'm proud to have it inside of me right now. Little pricy though. The most expensive single bottle I've bought this year (so far). Though I have been eyeing that 74$ bottle of Mad Elf Ale that's like three feet tall. I'd have to be insane to lay down that kind of cash... at least on my own. Though, I have been told that I have split personalities, so perhaps that'll make it all ok.

I've seen that big ass bottle of Mad Elf. I think it would look great in any home. I've also seen a giant bottle of Arrogant Bastard at a bar that would go perfect with it.