About: "Our decision to make this ale together comes from a shared passion for bringing natural beauty into the brewing process. Both of our families own and operate independent breweries and our co-workers, who share this passion, are an integral part of our extended family. / LIFE - For the living brewer’s yeast in every bottle working in vibrant unison to enhance complexity, refinement, and to encourage aging. LIMB - For the two syrups used in making this ale (maple and birch) which contribute to its unique flavor profile and symbolize this collaboration between Sierra Nevada and Dogfish Head. / This ale is dedicated to the family of craft-brew drinkers worldwide who continue to support the little guys, iconoclasts, entrepreneurs, and pioneers who risk life and limb to shape the craft-brewing community. We are proud to share our two branches with the thousands of other vibrant branches – those of fellow brewers – who collectively comprise the craft-brewing family tree. Sincerely, Sam Calagione and Ken Grossman." 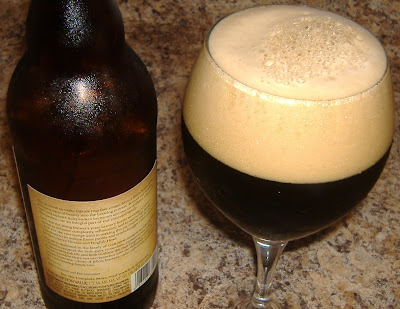 Nothing's really jumping out at me. Very light zingy malt. Caramel and very bitter unsweetened chocolate. I'm getting some fruity undertones, but no real syrupy scent. It's a little woody and grassy, but that's about it. Let it warm because only then will you get the brew's true scent, which is actually pretty good yet still, so very hard to acquire. You've got to breath in through your nose continuously for a while before it really starts to sink in.

It's got a good balance of hops and malt. Little heavier on the malt. I'm not getting straight up Maple Syrup that I've read about. Really I was expecting this to be full blown insanity of maple syrup taste, but it's not at all. It's instead rather earthy, and sappy. Not like some store bought sweet syrup aura you'd expect on waffles, ham or bacon. My big ass neighbor must use about a gallon of maple syrup every weekend morning because I walk out into the hallway and I'm nearly sandblasted by the stuff. I thought a bit of that smell would be in this brew, but it's not. Truth be told, I'm not really a Syrup kind of guy. I don't eat pastries, the last time I had a waffle it was blue, and though I recently visited the Indian reservoir Maple Syrup capital of the northeast US, I partook in nothing more than eating steak and eggs, smoking from a peace pipe and fondling various animal skulls. That being said, it still is a very sweet ale with nearly no bitterness at all.

Alright, so by now I let it warm up. This beer was never meant to be consumed cold. Do it room temperature. Don't even question the thought, as coldness hides every single aspect of Life and Limb. It smells and tastes more like syrup, and still with very earthy overtones. It's still not raging with Maple Syrup, but rather dark fruits like plum, prune and black cherry. The sappy, bittersweet syrup comes through in a seemingly dancing rhythm. Aftertaste is a bit of grapefruit citrus, and lemon zest. Not too dry, but a little drying. Kinda sticky and lingering. There's a boozy feel with each gulp. It's warming. It's a stark contrast to how it was when so cold.

I guess I let expectations get the better of me this time around. I was expecting something so utterly strong and dominating, that when I was hit with all but hidden flavors and scents from a brew too cold, I nearly had a mini freak-out. "What the fuck am I going to write!?", I thought. I've been looking forward to this for so long. Well, it turns out that everything went pretty well in the end. Overall, a fine, fine brew. Spicy, malty, thick, tingling, bittersweet, warming, and the slightest bit astringent. I remember tasting tree sap when I was younger, and this reminds me of that a little bit. Just don't go in expecting Mrs. Butterworth's.

This beer is fucking amazing. Having missed out on the first release, I'm so glad that they decided to brew it up again. Definitely one to drink warm, and goes great with anything pumpkin flavored or ginger flavored. I drank a bottle of this while eating Ben and Jerry’s Pumpkin Cheesecake ice cream. Delicious! Glad I have three more bottles aging in the cellar.