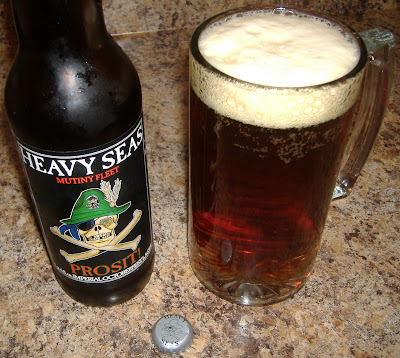 The Official Statement: "Malt focused with five types of grain including Vienna and Munich malts - plus a secret extra malt that we use only in our Prosit! Balanced with 3 kinds of hops."

Presentation: Nice hat. It's their standard skull and crossbones logo, but this time with an Oktoberfestive cap. It's going to be neat when I line these up all in a row later on my shelf.

Appearance: Pours a dark blood orange, almost red with shades of amber and an off white, one and a half inch thick head. The bubbles in this are popping and going crazy, rapidly... there's plenty of carbonation rising throughout the brew.

Taste: Whoa! Tastes like a semi-bitter candy, almost medicinal. It's fruity too. I was at a barbeque party about a year back and there were these cherries in a big jar. Well my buddy kept bugging me about these stupid cherries until I tried one. What he had failed to mention is they have been marinating in vodka for a week or two. I'm reminded of that moment when I taste this. Only instead of an overpowering vodka tinge, the fluffy malts in this one roam around in the mouth. It's kinda spicy too, not quite sure if that's cinnamon but there's some kind of toffee sprinkled with black pepper thing happening. It's not major though. And I'm getting some apple in the aftertaste, as if I had taken a bite of one ten minutes ago but hadn't eaten the whole thing. It never really gets bitter until you swallow, and even then it's minor... but you can definitely get that boozy sensation.

Mouth-Feel: Full, frothy with a little bit of a tingle. This 8.0 is seriously drinkable.


Finish and Overall: It finishes pretty damn smooth. I'm on (almost) an empty stomach, just got through half of this and though I'm thirsty as all hell I can still sip this and enjoy the flavors. I chilled it only slightly once I got home, say about twenty minutes in the fridge and ten in the freezer. It's warming quickly and so am I. This brew is a very pleasant experience. How it compares to other Oktoberfest Lager brews I'll have to wait to find out, but one thing is for sure... I am one Imperial lovin' bastard. Heavy Seas Prosit!? Totally worth the six bucks.

Email ThisBlogThis!Share to TwitterShare to FacebookShare to Pinterest
What the... Beer, Heavy Seas, Märzen