About: "Jack McAuliffe was the first American "micro" brewer. His tiny New Albion Brewery in Sonoma, California inspired countless dreamers to start small-scale breweries of their own. Jack agreed to guest brew this very special ale with us in honor of our 30th anniversary. This Black Barleywine Ale is a nod to the legendary ales New Albion served at their legendary summer solstice parties. Rich with bittersweet and roasted malt flavors, balanced with whole-cone 100% American Cascade hops, this robust ale should age gracefully for years." 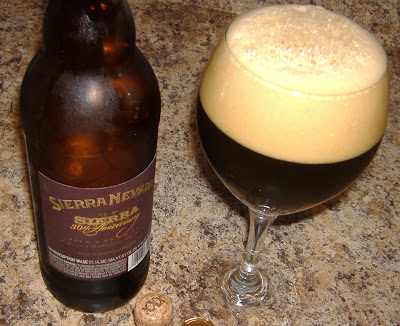 Thoughts: Popped the cork and it came out a smokin'. Poured blacker than the night. Looks absolutely gorgeous, with a dark-tan brownish head that took about five minutes to fade (the mustache helped a bit though).

Oh, so rich. Savory. Strong. Chocolate milk, then a slight alcohol tingling. Then fruity tones come in, there's cherries and raisins, and a also a little bit more of that coffee taste that rounds out the finishing touch. Aftertaste is a little like grapefruit, and kinda grassy. You can tell it's got that signature Sierra Nevada yeast.

Little bit frothy, slightly heavy, but goes down damn smooth. It's bittersweet, but the bitter is so subtle aside from that grapefruit in the aftertaste. Drinkability is way above average, especially for such a strong ale. This is a downright beautiful brew that would be a damn shame to pass up. I'm glad I didn't.

About: "Brewers Reserve is a special ale highlighting our pioneering history and the innovative spirit that has carried us through all these years. Is is a marriage of our three most acclaimed ales: Oak-aged Bigfoot, Celebration Ale, and fresh Pale Ale blended together and generously dry-hopped.  Come join us in celebrating thirty years with this most special brew. Drink it now, or save it for a future anniversary of your own. Note: 22% ALE AGED IN BOURBON BARRELS, 78% ALE" 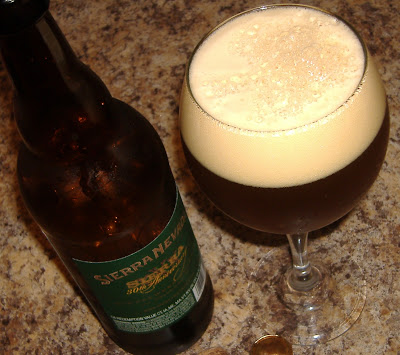 Smells pretty spicy. Malty and sweet. Almost indescribable. I think I'm in love actually! I want to have this scent forever. I've said that about one other mind altering substance, but not too often about a brew. Toffee ice cream, or rather, like a Heath Bar. Only drowned in superb alcohol.

Flavors bounce all over the place, and flows of different tastes that roll about in the mouth. This is insane. Caramel, and a bitter candy-like sweetness for the most part. It's a little bit peppery too. I sneezed once. Black cherry, raisin, half-cooked dough, white pepper, brown sugar, very light malt vinegar.

A little bit frothy, tingly, and yet goes down so damn smooth. Impossibly smooth even.

Not really getting too many fruity tones in the aftertaste. It's very woody. The bourbon flavor, to me, is pretty light, but the oak and sweetness of it really comes out on top of everything in the finale and it is applause worthy. It's like a deliciously Evil caramel liquid candy that kicks your ass sideways.

Wanted to try this, but never found it by me. Sounds really great though. Hopefully I come across a bottle some day.