About: "This unique brew combines all the traditional qualities and style of a Charles Wells beer with the subtle flavour of banana. The beer has achieved a number of accolades including winner of "Beer of the Festival" award at CAMRA's London Drinker Festival in March 2002." 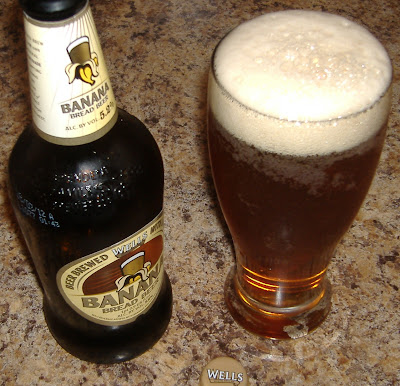 Words: Poured a darkish orange amber with a fluffy eggshell white head that slowly bubbled itself away.

First impression. Wow! Smells just like freshly baked banana bread. Spot on! It's crazy how close they got it. After a few more times leaning in and out it starts to smell a bit like those candy "circus peanuts". The real banana bread scent and banana "flavoring" seem to go back and forth. And it's a bit like dried sugared banana slices... like those ones you find in trail mixes.

Taste is a strange one. I don't really tend to notice "bubblegum" flavor that I've read about quite a few times, but this one's got it. Aside from that the beer seems well balanced, but has this sort of overall blandness about it. I wish there were a more spice-pronounced flavor that goes along with banana bread. And while it is bready, it could use a touch-up on the recipe - say for instance a little brown sugar and cinnamon. The spice of the hops alone just isn't cutting it (no pun intended). That said, it's still pretty decent.

It's a little heavy, and not the most approachable beer I've ever had. Kinda tough to swallow in big gulps. Finish is thankfully bitter, yet dry.

It's an interesting gimmick beer that's fun to try once, but I just couldn't get past those Circus Peanuts. I never really liked them too much when I was a kid, and I'm pretty much still a kid... only with a long ass wizard beard. Wells, it was fun while it lasted.

Email ThisBlogThis!Share to TwitterShare to FacebookShare to Pinterest
What the... British Beer, Fruit Beer, Hybrid Beer

Ugh I hate circus peanuts too! The thought of that getting that flavor taste while downing some brew just made me throw up in my mouth a little...which still tastes better than circus peanuts.