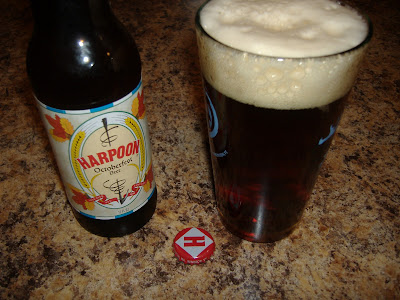 Stuff: "The beer’s color is from a blend of Munich, chocolate, and pale malt.  The thick head results in part from wheat malt added to the grist.  The hop aroma of this beer is not overpowering but it is present.  Tettnang hops add a subtle spice nose that blends with the malt character. Willamettehops are used to provide a gentle bitterness and to balance any residual sweetness present from the malt.  The finish is soft and malty with a mild bitterness."

Pour: Pours a pretty deep red with amber shades and a huge fluffy head that almost spilled over.

Smell: The initial scent I'm getting is some grape wine here again, just like the Spaten. When that sour mash hit me first it was a bit unnearving. That all died down after a minute. Getting some subtle fruity tones afterwards.

Bite: Very bitter and hoppy. Not much to say about the taste other than those two things seem fairly well balanced enough. Except that it's ending up way too sour. The bitter and the sweet are ok, and I'm getting some weak spices and bread but nothing really seems discernible. I can't figure out if it's this or that.

Open Wide: Feels fluffy in the mouth, a slightly light to medium body.

...and Later: For a 5.5% ABV this one sure does smell and taste a bit strong. Hop and Malt strong. It's too heavy in the areas that it perhaps shouldn't be. The finish is major bitterness. The sour and sweet have all but faded and it's all just a bit grim and smokey. A heavy funky blandness. I'm not really digging this one too much.

Email ThisBlogThis!Share to TwitterShare to FacebookShare to Pinterest
What the... Märzen, Massachusetts Beer