Immortals (2011)
Rated: R (For sequences of strong bloody violence, and a scene of sexuality). 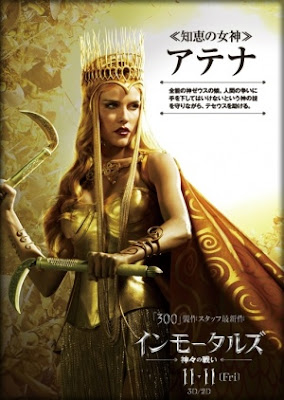 On 11-11-11, there came another movie... one which didn't Suck! (Note: I haven't actually seen 11-11-11 yet, I just wanted to say that). Immortals tells the story of the absolutely ruthless King Hyperion (Mickey Rourke, daw yeah!), who's roaming the land in search of the mystic Epirus Bow, a weapon of presumed myth, and legend. He needs this Bow to set loose The Titans, a nemesis group to the Gods, imprisoned since ancient times and thirsty for revenge. Though the Gods' laws restrict them from interfering with Man's destiny, Zeus himself under the guise of a wily old man (Luke Evans and John Hurt, respectively), raises and guides bastard child Theseus (Henry Cavill) to become mankind's savior. How that isn't to be interfering, I don't know... but I will not question the mighty and powerful, old turned young Zeus. All chaos ensues, and after King Hyperion kills the only mom that Theseus ever had, shit doth get utterly fucked up! Oh yeah, and Spoilers too.

So what was so cool about Immortals? Let me start with the Perfect Casting! Henry Cavill. Not only is this guy a great, simplistic actor (first saw him in The Tudors), but he's also just got that look (totally Ripped).  He plays a sensitive, lost soul with null and void religious beliefs. Caring about only the things closest to him, he closets the Inner Rage within! And man, is he fuckin' full of said Rage. Mickey Rourke is at his best here as one Evil, Unemotional and Dark motherkiller! Totally rivaling his role as Marv in Sin City, Rourke has taken his gritty yet elegant, ugly yet enticing, uncompromising yet giving nature to the Ultimate Level (Think Gary Oldman in Dracula). He's magnificent in every aspect and the true star of the whole f'n show. Steven Dorf makes a Blade comeback and totally Rocks It as a horny ass thief who gets pumped up and never lets his adrenaline level drop down. Luke Evans is spectacular as Young Zeus. Though much of his work is an intimidating emotional look, he pulls off a superior and saddened God quite well.

Onto the beautiful women. Isabel Lucas, evil tongue-lashing, Fembot-in-Disguise from Transformers 2 is here as Zeus' daughter, Athena. Hot as all fuck, she looks kinda like She-Ra in her Goddess uniform, and not only does she kick some Serious Ass, but all of her scenes are actually important to her character development. Imagine that. She was a perfect choice for this and her beauty is much appreciated by me, especially if I have to look at so many muscular, shirtless dudes. The most beautiful and visually intoxicating Freida Pinto (Slumdog Millionaire), gets totally naked (body double) and aside from that looks so fucking beautiful every single scene she's in. Not to get picky with the close-up that is a butt double, but the far away shot sure as hell looks like her (I know it's supposed to), even if she's in the shadows you can still see "things". Nice close up butt shot though. I don't think I heard much of her dialogue as I was too busy using my drool to shape my wizard beard into an erect point. She plays Phaedra, an Oracle with three distracts, who sees future events and seriously wants to get laid! 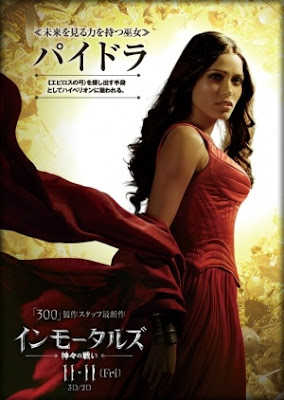 Secondly, it's GORY AS ALL HELL! The fight scenes are palm-sweatingly intense and their potentials are all reached to the maximum. There's heads fuckin' exploding(!), heads cut off, throats slit, stomachs pierced, bodies cut in half, limbs torn and cut off, eyes gouged out... major bloodshed, anarchy, chicks get roasted to death, and one dumb-ass headless fucker gets kicked off of a nine hundred foot cliff in which we get to watch him from afar, fall... all the way down. All of it very tastefully done. Some (not all) of it in that Zack Snyder slow-mo, with insane positions and maneuvers that not only tingle the brain but make one confused enough to think for once. It's completely badass. The finale goes nuts, and you will break a sweat! There's mental anquish and sheer torture throughout the film. I like that! It's a dark, dark film with lots of death and thoughts on death, and great dialogue on the legacy that one can leave behind. Be that a legacy of brutality, or of heroics. There is a hunger for both.

Also, there's The Look! Though majorly shot with seemingly CGI backgrounds, everything is so well done and thought out, that it's simply amazing looking. Many scenes transition from one another into similar looking but different locations and set pieces (say for instance a mask lingering will become a boat being rowed down the black ocean). Things like this happen often, and it's remarkable how visually interesting it's done. I can only imagine what it would have been like if I were not sober. The sets were also magnificent. Cinematography was mostly CGI play fields, but all of the zooms and fades and roaming just looked damn good. This movie really is like a painting come to life. Costumes are also great. For the most part it's the masks and hoods of the evil motherfuckers that attract. But for the royalty, purple capes and armor was used. Gold, exquisite and strange interesting head pieces for the Gods. Even the peasants had some stylish gear (hey, they're not rags!). It was all very well imagined and commendable. The story may not be the most unfathomable imaginable, but above all, the acting, look and gore made every single scene worthwhile.

The 3-D was subtle for the most part, but the movie was very layered and really thought out in terms of how every scene fits together depth-wise. All the positions of the actors and locations were done splendidly and it was, quite simply put, gorgeous. The color was a little drawn out, but I would have rather seen it in this way as I'll never do so again. Plus, the colors in these types of films are always a bit drawn out. Immortals is going to look beautiful in home High-Def hopefully, especially in its normalistic film version. Buy it, and Love it! That's your only option as far as I'm concerned, unless of course you see it now, and then do so.

Hmm, I wasn't going to bother watching this, but now I kinda want to lol.

Watch this and Reel Steel afterwards. Fuck it. Ya know? I mean... what's left of life. But really, this movie kills. And Reel Steel wasn't as bad as I wrote it. (yeah, it was pretty horrid - but fun).

Great write-up! I would watch Frieda Pinto play Yahtzee. The fight scenes were indeed awesome as well, with the last one between the gods and the Titans in particular kicking all kinds of ass.

I can't wait to see this one on the theater, hopefully this weekend. The trailer I saw in 3D was awesome.