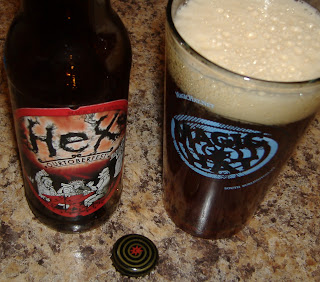 Look: Poured out a hazy golden orange, like honey, with a dark bubbly head that didn't entirely fade. Something weird is happening in the bubbles. They're clumping together in some spots. I'll blow on em and they'll dissipate then form in other areas. What the fuck!?

Scent: Smells different from the rest straight off. Not really like a  märzen at all, which as I hold it in front of my computer monitor just now and see, oh of course, it's a red ale like Freaktoberfest. The scent has a very caramel undertone to it.

Feel: Medium bodied. Leaves an astringent feeling, and it's a bit drying.

Final: This one's not bad. It's a bit malty though, and there's not much going for it in terms of special recognizable qualities.  Wish there was more to say about this one, aside from that it tastes pretty good, but it was somewhat plain. It's their highest ABV from their seasonals, and has the coolest artwork, but I'm not really feeling the brew all too much and that's what matters most. I don't dislike it, but it just didn't live up to that wicked image.

I like how you summed this one up. That's kinda how I feel about Magic Hat. I used to like them a lot, but found that I drink their beers less and less over the years. The winter seasonal, Howl, is pretty smokey and good though.