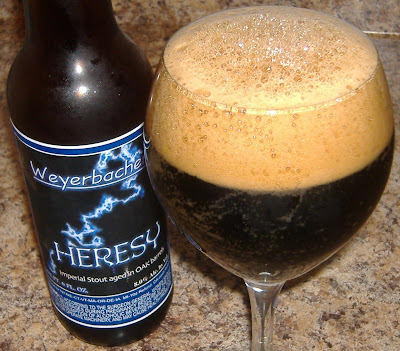 About: "This is an incredibly intriguing ale is made by aging our Old Heathen Imperial Stout in oak barrels that were used for making fine Kentucky bourbon! The result is an extraordinary, dark, and mysterious stout whose very essence has been enhanced. The aroma is filled with vanilla, cocoa, and roasted coffee beans. This silky-smooth brew has notes of oak, whiskey, roasted barley and vanilla that meld together on the tongue to create an incredible sensation."

Thoughts: Poured a super dark black with shades of brown around the edges and an ultra frothy tan head that just... wouldn't... die!

It's got a wonderful smell. Chocolate and coffee scents blend well together with a little tingling of the alcohol striking a nerve. It doesn't smell crazy strong, but rather a low flow of chocolate milk for the grown ups.

Tastes of the smell, then the malt, and afterward the coffee slowly creeps in for a while before the swallow, and afterwards, it completely obliterates the palate and takes over! Damn. Let me try it again without swallowing. Yeah, I know how that sounds! Malty. Sweet. Seemingly well balanced as those hops try their mightiest to come out but just can't seem to make it. It's got the toffee of a Heath bar with a nice zing of alcohol and the finish is a bit woodsy. I've noticed that I tend to like the alcohols that have been aged in oak barrels. Is that a "who doesn't?" sort of comment? Well, if so then why aren't they all?

Mouth feel is a bit watery. But there is trickery afoot as it does come off as rather thick. I've noticed this with quite a few brews actually, so maybe I'm not the authority on the feel of mouth... but to me, it all changes within the span of twenty seconds.What am I supposed to do? Keep it in my mouth and let it break down or just chug it once to decide how the mouth feel is? Not every brew does this, but many of the heavier ones do. Just as the scent and taste go through changes, so does the feel of it. So I guess that makes this one thick and watery.

There's a little smoke in the aftertaste. Which I like in this kind of brew. And I don't know but it seems a bit fruity too. Don't know if that's the pussycat on my tongue or what, but it's kinda like... strawberries. Mary Jane's lip gloss, really. As I swirl my glass and stare down into this magnificent alcoholic galaxy of light foam, I know that I've had too much to think comprehensibly. For a 2009 bomber that's been who knows where, it's pretty awesome...

Email ThisBlogThis!Share to TwitterShare to FacebookShare to Pinterest
What the... Barrel Aged, Beer, Imperial Stout, Weyerbacher