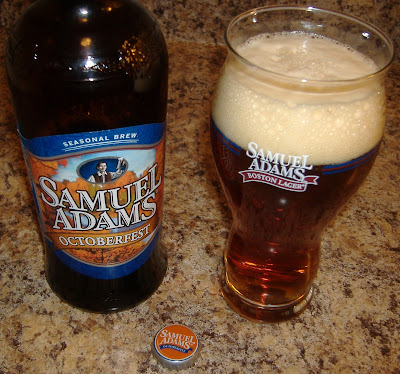 Look: Poured out a light reddish tone with a huge puffy head that eventually bubbled its way down to nothin'. Carbonation is very light after that.

Nose: Little bit spicy, but it's very subtle. There's light cherries. Besides that smells like a malty lager.

Lips: This one is pretty sweet, not like over the top sweet, but with the amounts of malts to hops, it comes out pretty good. Still, with that said, it's not really getting me too excited. Caramel and toffee for the most part. Nothing else is really standing out, but the balance is quite well done.

Final Thoughts: A well balanced and good tasting brew that's uneventful and leaves no real lasting impression on this here guy. Apparently this beer won the 2006 Great American Beer Festival for Märzen (a year after Michelob won [which then lost to this the next year - and out of 45 total entries(!)]. Either Märzen just really ain't my thing or... well, I don't know. For me the Oktoberfest stuff I've recently tried has been split into three categories: German, USA and Red Lagers, resulting in a bit of compare and contrast difficulty. Though German beer has always been of an acquired taste to me, it has grown on my senses and now I'm coming across this strange stateside beast. Not that I mind finding out what I like or what's the best stuff out there (in limited testings of course as there's no way I can try them all for whatever reasons). But, this brew is OK. Not more OK than some of the others, but still good.

This is one of my favorite Sam beers. For years I only liked American Märzen interpretations, like Sam Octoberfest and Brooklyn Oktoberfest. But my pallet must have changed some, because I really enjoyed the German Märzens this year. One that really stood out for me is Weihenstephaner Festbier. It's lighter than typical Märzen beers, but really good.

For the good taste that it's got and the low price for the 22oz Bomber I'd say it's a steal compared to the others. And it's not funky either which some of them suffer from.

Out of the Octoberfest beers I've been drinking lately, I've only really liked four of them. This one is currently in fourth place on that list.