About: "This light lager is flavored with natural blueberries giving it a clear but subtle blueberry flavor. Made with pilsner malt, a touch of wheat for crispness & lightly hopped with fine German hops." 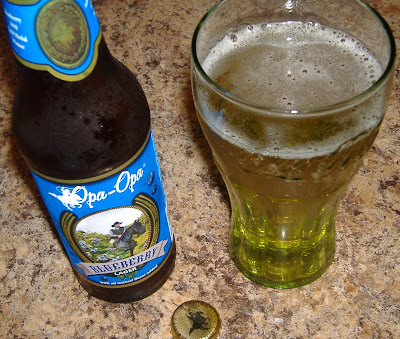 Thoughts: Bottle says that this brew is a "gold medal winner", but doesn't say from what or where. Doesn't show the ABV either. Quite frankly, I'm shocked there's even a born on date as many other beers don't even have that.

What in the fuck!? Poured a very light cloudy yellow with a no-inch thick head that disappeared as I took the photo. It was basically gone as I poured the thing. Born on date is 07/12/11. Looks like white grape juice. Talk about unexpected.

Well it sure as hell smells of blueberry. The lager smells very light. Not really sure if the blueberry flavor is real or not. I would imagine if there were actual blueberries brewed in with this it would have some color and not be one of the clearest beers I've ever seen.

Hmm. Smells a lot sweeter than it tastes. It actually tastes pretty sour and citrusy. Like the kind of feeling you get when you bite into a lime. There's no kick to it other than the puckering up it forces on the mouth. Taste is fairly light beyond that though, and there's really not much too it aside from that synthetic tasting fruitiness. The closest thing I've had to this recently would be that Woodchuck's Pumpkin Cider.

It's fizzy in the mouth and real light. It's pretty drinkable but you probably wouldn't want to do so. This rates slightly above Blueberry Seltzer Water.

Finish is dry and stale. I don't want to gross anyone out, but 'about to engage in oral sex after a few hours of exercise without showering' is what I'm getting two thirds of the way through. Do yourself a favor and pass on this one. Sorry dudes. Opa-Opa's Pumpkin wasn't half bad (it was pretty much half good), but it was leaps and bounds a hell of a lot better than this concoction.