Company: "WychCraft’s innovative new recipe includes adding three infusions of Styrian Goldings hops to the copper, to create a highly aromatic brew, bursting with succulent citrus and lime hop character. A light base of delicately flavoured English Fuggles hops, and the use of a lager malt, help retain the signature hop character and create a wonderfully aromatic and fragrant summertime beer. Beguiling to the end. Hops: Fuggles and Styrians / Malts: Lager and Caramalt." 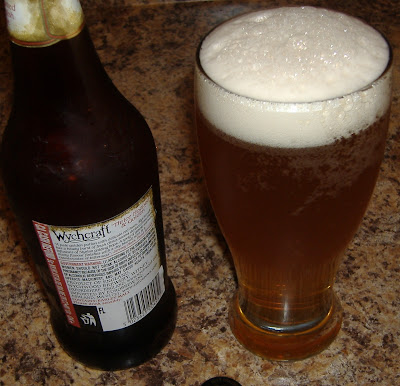 Thoughts: Poured a super light amber with a huge puffy, slightly off white head that stuck it out.

Smells like a Lager. But nothing at all light a light one. We're talking heavy and strong. It's very citrusy, and quite hoppy too. With bitter malts that are hard to make out. It smells a bit like MGD. The smell takes me back to probably the first beer I ever bought and drank... in an old church playground late at night (a 32oz MGD which I had shoulder tapped when I was fifteen). But I haven't had a Miller in years so I don't know if they still smells like this.

Tastes just like it smells. The malt is a little heavier on the tongue, and it's got a Pillsbury Biscuit type aftertaste. Overall a fine tasting beer. I like it, but it's not extreme enough for me. Spiciness is almost non-existent. It would be nice if American Lager beers all tasted like this though, as it tastes very much what average beer should taste like.

Smooth, goes down easy and is dry in the finish. For a 4.5% ABV this one doesn't feel light at all, not in the taste and definitely not in the smell.

I can't see any lover of beer not enjoying this. I'm looking forward to tying more from this company. Especially the Bah Humbug in December. Christmas brews, here I come! (I just hope they come to me). I, unfortunately and perhaps surprisingly, have not had any other of the Wychwood beers. Not even Hobgoblin. I've always meant to, and have always been intrigued by the artwork and the shape of the bottles/logo, but I suppose I was being a wee bit of a Nancy boy back then mate. No worries though... let's see what all the fuss it aboot.
Laid to Unrest by DrunkethWizerd

Email ThisBlogThis!Share to TwitterShare to FacebookShare to Pinterest
What the... British Beer, Pale Ale