I've got some upcoming Events that I'd like you all to know about, if you can call what I do to be eventful...


First off, I'm going to be doing this fairly big Sierra Nevada series of brew reviews (a lot of their special stuff). Sierra Nevada's Pale Ale was the first Ale that I ever tried, back when I was doing intern work for an independent aspiring video game company run by stoner, earth-loving hippies with a taste for the good shit. I was fifteen, got bored, raided their fridge and chugged the last three of the leftover six pack in one large plastic cup. For a non-paying job, sitting in a dark room stoned all the time and playing on Photoshop for hours while nobody bothered me, it was pretty sweet. Once they pushed their drug-loving founder out and tried to go "corporate" in a new, totally not as cool building, things went completely downhill. I stayed for a few weeks but ended up getting the fuck out of there. The change in attitude was bullshit. No more trips (LSD, Cinema, Coffee House... you name it.) No more beer and smoke during work, and the music had to be approved. Motivation meetings? I think not, bitches. The place crumbled shortly afterwards. 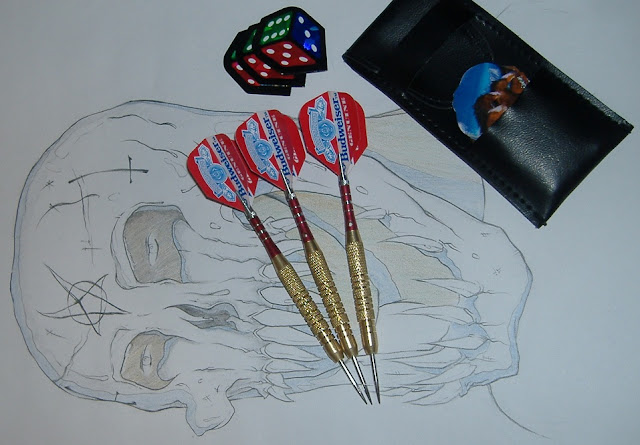 Secondly, I've noticed by visiting the liquor store time and time again lately (each day) that Christmas seem to be coming upon us. So therefore, I declare: Tis The Season To Get Fucked Up! I've been collecting a small arsenal of festive seasonal snowy brews which I'll be doing a little series on. No telling how it's all going to end up. I got cut short with my Halloween pumpkin brew reviews because the area couldn't keep me knee deep in the variety of it all. But I'm not trying for any records, I just want to find and drink the best damn beers I can stumble upon.
Third and fourth ... I've got some upcoming Artwork that (when I finish it) I'll be showing off. There are previews in this very post with the pictures of my new darts. And (back to beer) I'm also going to be trying all four of the new Samuel Adams Single Batch bombers that just came out: Third Voyage, The Vixen, Griffin's Bow and Tasman Red. They all look pretty interesting to say the least. Nice artwork too. Until then I'll probably not be doing much besides hanging at the pub practicing my darts and drinking. 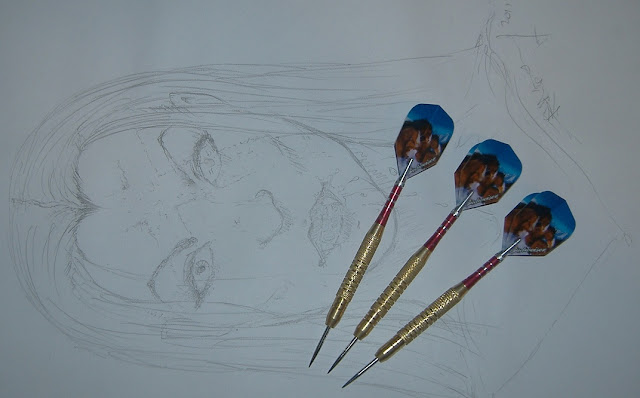 Oh hey, did I mention that I got a new set of darts!? I left my two sets of darts back home when I traveled afar, and it's been about ten years since. Probably not necessary to tell anyone, but I'm a bit of a barfly now. Never been to a bar before 2009. I'm a relatively quiet guy, bit of a loner(that's an Understatement!), but my friends are loud and have been around. There's a lady who owns the bar I go to. Well, I started shooting for a while with my friend's darts and joined a competition even though I totally suck! One day I decided to try the house darts and shot considerably better. I asked the owner if I could buy them. She told me no, and I left unhappy.
It wasn't a few days later that I got a phone call and was told that there was something waiting for me at the pub. A cold beer is good enough... but when I got there, I was presented with this new set of darts, straight from our lady owner. Her gift, to me. She wasn't there at the time. As I sat there drinking my beers, I just kinda stared at them. Words to describe this feeling came to be most difficult. Some people call it happiness, I suppose. I've not really done anything but be around. But she did this incredibly gracious thing for me, even though we don't know each other too well. When I talked to her about it she insisted that it was very much a gift and that I should keep on being me. It's been a long time since I felt something so warm inside that I was in disbelief.
[Notes: The pic doesn't feature the original stems, which were long, black and cheap. I bought shorter, red-colored spinners. My friend bought me the two extra sets of flights.]
Laid to Unrest by DrunkethWizerd

Email ThisBlogThis!Share to TwitterShare to FacebookShare to Pinterest
What the... Artwork, Stuff