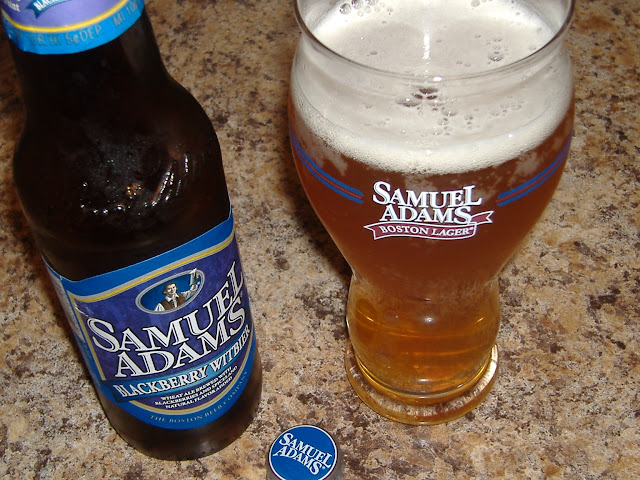 Smells fruity and tangy. There's a spiciness that creeps up afterwards too. Reminds me of this black raspberry ice cream I once had.

Tastes of wheat and bread... and kind of like Boo Berry cereal(!) That is, if you had used Sam Adams instead of Milk and let it sit for a while. The blackberry taste isn't weak, nor does it go overboard. Something pretty rare I'm finding is that this actually tastes better than it smells. Not that it smells bad but there's this strange twinge about it, whereas the taste is pretty straightforward, spicy then fruity, then a very soft bitter that resides underneath the sweeter tones.

Foamy, and giving of the frothing bubble belches.

Decent aftertaste. Even though this beer is a bit light and unoffensive, the taste does compensate. It doesn't taste weird or sour, it's a little bitter, a little sweet and sugary and doesn't overwhelm. It's just special enough that not everyone is going to like it, but I couldn't imagine anyone other than those who are disgusted by fruit beers to shy away from this if it came about.

I dig this beer too. It's not overly sweet like the cherry wheat, but not overly sour like some other fruit beers. A great beer for a hot summer morning.