About: "Hops: Cascade from UK and New Zealand, Simcoe from U.S. / Malts: Two-Row Harrington, Metcalfe and Copeland Pale, Caramalt, Honey Malt. This unique double IPA takes the style’s origins a step further.  IPAs were born out of making an ale that could sustain a long voyage.  For our take, we were inspired by the indomitable Capt. James Cook whose 3rd voyage made him the first to navigate a treacherous route from England to New Zealand to the Pacific Northwest. Using Cascade hops from each of these regions we crated a a brew that’s citrusy, earthy, and full of bold character." 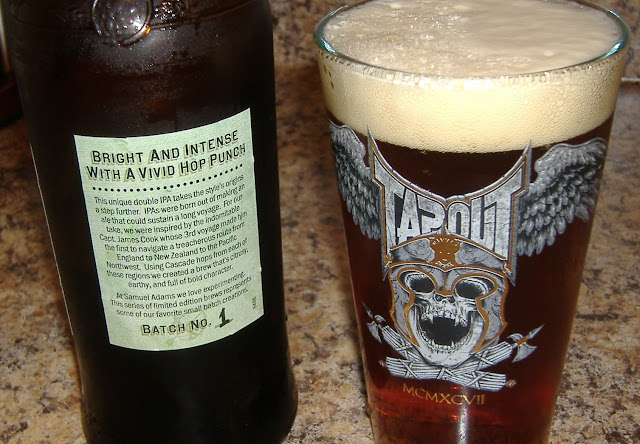 Thoughts: Poured a light amber, vibrant red with a with an eggshell near pinkish head that stuck it out for a while.

This doesn't smell as strong as the Tasman Red. Strange. I figured this one would be stronger in all areas. Instead it's a lot milder in terms of the hops. Sweet smelling, nonetheless. I don't know if it was malted out to hide the hint of strong alcohol, but it seems like it. Upon the second pour, and warming, there's a bit more hop notes.

For an IPA that's an 8.0% ABV this one sure is on the malty side. I'm hardly getting any hops in the all around flavor, only getting lingering notes of hop on the back of my tongue once the brew is swallowed. The malts are overwhelming, with the hops coming in only at the last moments. I'm a bit confused. The honey and caramel do a really good job of making this strong brew more accessible to the majority of drinkers, but for an Imperial IPA it seems a bit toned down for me.

It's very smooth and easy to drink. The alcohol is well hidden, but can hit you in short blasts if you're seeking it out.

I wondered why in this Small Batch Series of four brews they'd put out two IPAs. It seemed a bit suspect to me, and a bit overkill, or perhaps they were trying to prove something in terms of which one will get chosen. Though I've been on a serious Imperial kick, I'm rooting for the Tasman Red IPA. The taste and sensations from that brew are just far superior to this one's.