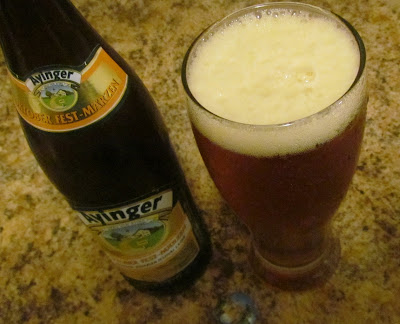 Bottle: This one wasn't on the shelves but rather in the middle of the entire micro-brews section, stacked upon cases. The 16.9 oz bottle size caught my eye first, then the gold foil shining in the florescent lights. But it was when I saw that cute and colorful little bottlecap there that I snatched it up. Take a look at that scene. I know what they're saying too: "It's not gay, when it's in a three way."

Appearance: Poured a light amber-orange with an off-white head that faded pretty fast. The bubbles are of varying size and there's low to moderate carbonation.

Aroma: Fruity tones, low level apple and tangerine... maybe some pitted, dried and sugared apricots. Malty too. Smells pretty much like a German Lager though.

Taste: It's a bit sour. Tastes of some ripe banana. Very low levels of nutmeg and clove. It's kinda peppery throughout, and bitter towards the end. Little bits of cinnamon rolls or a spicy sourdough bread, and toffee bouncing around, but it's not too noticeable. Then a little bit of sweetness comes around and balances things out. Tastes pretty damn good actually with all those subtle bits of flavor. Nicely done.


Finish and Thoughts: Crisp. Bitter. Not a heavy beer, but it's got a slight kick that dies down once swallowed. Though I haven't tried too many German beers, this would be the best of them so far. I never did really develop a taste for German brews (Löwenbräu was the only one I ever liked out of the few that I drank years ago), which is why I ended up passing them up for the most part. This beer though, had a very nice balance and tasted good enough to be a session lager or even to drink with dinner. I'm impressed.

Email ThisBlogThis!Share to TwitterShare to FacebookShare to Pinterest
What the... German Beer, Märzen