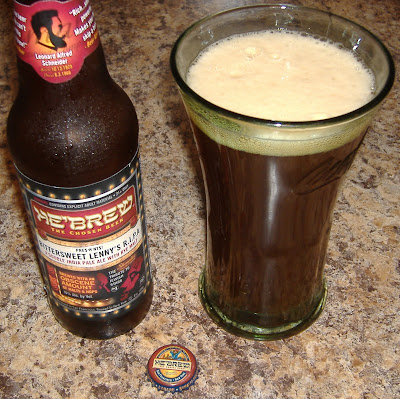 Thoughts: Poured a dark, dark hazy amber with a light tan head. Some dark bubbles are rising up around the edge of the glass which are pretty much impossible to see as this brew is thick like fog.

It's pretty intense. Very toasty. Bitter. Some of the sweetness comes through when you're feeling around for it, but it's a hard sweetness. Very faint grapefruit at the very back of my tongue, as well as some all around the mouth Christmas tree sensation. This is only my second Rye beer I think, so I'm going to have to experiment a little with other brews like this to see what's going on. The alcohol creeps in as a backdrop, but it's only accentuated by the previous blisteringly absurdity of malt and hop.

Thick. Foamy and attacking. Expands in the mouth and explodes, making it a slight chore to drink unless you're ready for it. I feel kinda dried out about 3/4th's the way through.

Not overly offensive, but definitely lingering. You're going to have to scrub this taste out of your mouth. It's bitter and sweet (hense the name I guess), and it sets out to do what it does. Well, it's powerful as all hell, but I'm not blown away by the taste (That's compared to all the beers I've ever drank though, and not compared to other Imperial IPAs or Rye brews). It's a good thing these are only sold in 4 Packs or 22 oz. Bombers. Actually wish I had a bomber of this... shit, now I'm sad again.

Email ThisBlogThis!Share to TwitterShare to FacebookShare to Pinterest
What the... Beer, Double IPA