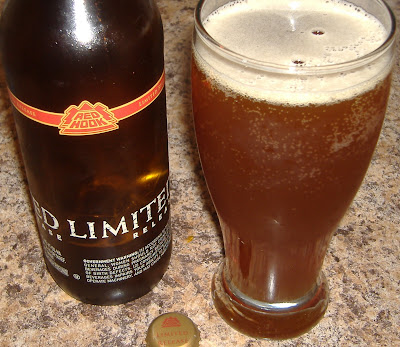 Pre-thoughts: I guess the question is, should I drink this? I noticed the liquor store going through boxes the other day and suddenly this was on the shelf with all the specialty bombers. Never seen it there before and trust me I've looked around. So was it in a box this whole time? Did the box have a goblet in it that I got fucked out of owning? Am I going to die if I drink this? These are the things crossing my mind as I sit here... now drinking this.

I read that it can be aged one to three years (it was bottled Sept 08'th, 2009 - Approximately two years ago), but it states that it should be "cellar aged" and that the "shelf life" is one year. The bottle is pretty damn dark and unlike many other bottles it's got a thick, dark film from the printing all over the bottle which I suppose may help keep out light anyways. Meh!

Thoughts: Light orange, amber color with hardly a bubbly head that fizzed itself away super fast. I hope those things floating around towards the bottom are good for you like those active live cultures in yogurt. This is the lightest barleywine I've seen thus far (Cross that - Sam Adams Griffin's Bow just got the title).

Sweet malts flow throughout the nostrils as I think to myself, yeah, me happy.

I'm hit with bitterness, both of malts and hops. There's a bit more hops than I've been used to in barleywine with this one. Maybe they're just coming through with the age (or not?). It's a little like a stale bitter coffee with a bit of a citrus tingle on the back of the tongue. Still pretty sweet though with some minor chocolate notes, and after warming it tastes a lot more of caramel. But still I've never had a barleywine with so much of a hop profile before.

It's smooth, and full flavored. Little bit of smokiness coming through later on taking over the initial cold bitterness. All around it's sweet, savory, and has that hop tingle to it with the uproar of malts.

I don't really got an overall for this one. I think I only drank one Red Hook in my life (a bottle out of a six pack) and it was whatever their standard brew was in the freezers at the time. Don't remember. In regards to the other barleywine ales I've recently tried this one is my least favorite of the bunch. It would be good to be able to find some info on these sort of things (it's very lightly funky). There's a lingering thickness on the tongue and really no aftertaste. It was OK while it lasted.

Email ThisBlogThis!Share to TwitterShare to FacebookShare to Pinterest
What the... Barleywine, Beer, Red Hook