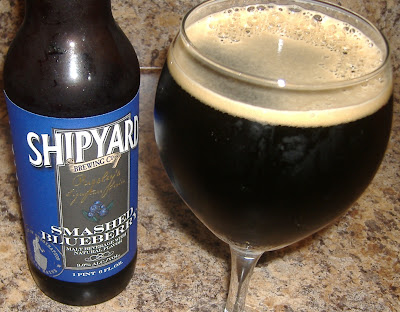 About: "This beer is a hybrid between a Porter and a Scotch Ale. This beer has a rich mouth feel and a body of complex intensity. Upfront, there are distinct flavors of coffee and chocolate beautifully accentuated by the aroma of fresh blueberries. The finish features a delicate balance of sweet fruit and dry hops. Malts: Pale, Crystal, Chocolate, Roasted Barley, Light Munich, Torrified Wheat / Hops: Summit, Tettnang, Cascade / Yeast: Top-Fermenting English Food Pairings: Glazed Duck, Ribs, BBQ, Chocolate, Blueberry deserts."

Thoughts: Well it's not blue as I had previously worried it would be(!), so that's a good sign. Dark tan head that wasn't much of a build and faded out just as quickly as it started to form. Color is dark, dark brown. Can't see through this brew at all.

First thing I got hit with was the high alcohol level. Then it was somewhat like a strong ale, but kinda reminescent of a not-so-bad malt liquor. Gave it a few seconds and then that blueberry really started to come through. I'll start this one cold and let it warm while I drink it to witness the effects.

A high alcohol haze surrounds slightly burnt toast flavors that come through later like a blueberry bread or a jam smear. This doesn't taste like a blueberry muffin at all so don't go in expecting that. It's not sweet at all, but rather bitter instead like a spiked coffee. "Malt Beverage with Natural Flavor" is the description. This brew makes me happy, but it's a child-like happiness... that later slugs you in the face with harsh reality! And that's the way I like it.

Heavy mouth feel with a tickle and a pucker up. Leaves a feeling in the mouth that isn't a film, nor a slickness... it's somewhat dry, but not drying. If you're into wine, you may like this. But I wouldn't suggest being into wine.

Aftertaste is very pleasing actually. Better than I would have expected. The bitter and semi-sweet both work together quite nicely.


It's not an immediate go-to re-buy beer for me, but I just may try it again once or twice in the future. I'm not really much of a blueberry fan to begin with. They're like the WTF fruit of the berry universe. I much prefer blackberries actually. Drinking this makes me dream of that the label would read SMASHED BLACKBERRY instead. Damn, that would have been sweet. This is on par with their smashed pumpkin, they're both quite similar actually, but with the different headlining flavors.