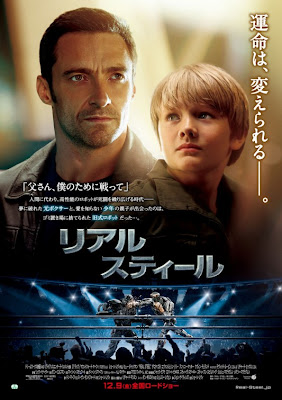 Hugh Jackman plays Charlie Kenton, a down and out former professional boxer and now desperate, independent robot-boxing promoter who owes nearly everyone he knows tons of money. All this guy cares about is making whatever cash he can get as soon as possible, by booking his robot in all-or-nothing fights. Of course, ever since Robot Boxing took the world over and forced him out of the ring, his life has been a downward spiral of bad luck and reckless decisions which repeatedly cost him the very expensive bots he comes to own. Never one to learn a lesson, he'll work up a scheme or two here and there to procure a new bot once his old one gets thrashed. It's all he cares about, he's become a shell of his former self, and it's all very sad to watch. Of course, the character of Charlie Kenton is a complete fucking asshole and a dick to everyone around him so you as the viewer couldn't give a shit. That is of course, until his ex-girlfriend dies and he's reunited(?) with his son, Max (Dakota Goyo), whom he abandoned after birth. His ex's sister wants custody of course, and Charlie goes about conning the lady's husband out of $100,000 cash money to sign him over to her. Only to make things look good for both of them, he'll take the kid in for a few weeks and she never has to know about the deal.

So, can you see where this is going? I could. It's glaringly obvious. Real Steel ain't about the Robots. In fact, out of the few messages the movie is trying to convey at whichever time, it's hinted majorly that Charlie himself is the robot that his son comes to resurrect. He's an emotionless, reclusive, and downright mean (non-psychically abusive) son of a bitch who's completely caught up in the dream that he never dreamed. He's become a lost soul, who's in such a rush all the time to make money that he doesn't stop for a moment to see that he's destroying all of his relationships. As Charlie and Max go on their robot fight road-trips, a series of consequential events occur which bring the two closer(?) and as you would expect, Charlie shows signs of giving a fuck. Who would have thought. But giving a fuck ain't easy when you're so ripped. All I could think about while seeing this emotionally awakening and tragically beautiful father and son bonding movie was "Fuck these motherfuckers for trying to make me feel shit! I don't want to feel. I want to not feel!" Unless I'm feeling something in my pants when I see that super hot ring-girl in the wierd blue Tron getup during the final match. There should have been more scenes with her and less scenes with talking about feelings.

I fear that I'll end up having to watch this eventually because my son thought it looked "cool", however I'm not looking forward to it.

Not that I'm gettin' soft, but it's not actually horrible. I was just fucking around with my review and only talking about the stuff that was so "OVER THE TOP".

That's the real story though! The super hot chicks and cool ass robot stuff was an added bonus. But yeah, this Japanese poster got the movie right. It's not deceptive like the US versions.