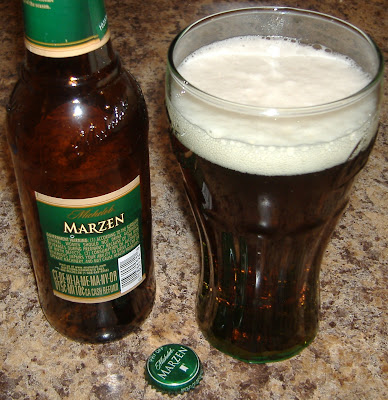 About: This beer won the Gold Medal at the 2005 Great American Beer Festival for Märzen(!), the Silver in 2006, Bronze in 2007, nothin' in 2008 and then Bronze again in 2009. Seems as if things have gone downhill a bit. Either that or the US Oktoberfest scene has really stepped up as of late (I highly fuckin' doubt it!).

Look: Poured a hazy gold and somewhat rusty copper color, with a fluffy one-inch white head that faded rather slowly.

Scent: Smells pretty uneventful. Like a lager, kinda sweet, but it's a light one.

Tongue: Taste is OK at best. No real problem there. It's not as sour or strong as some of the other Oktoberfest brews. Watered down toffee and nuts. They must have made this so completely average in every way so that girls and guys alike could enjoy it. By that I mean... well, anyways...

Overall: Well, it's not brazen, yet it's not obnoxious either. And it's not horrible, but that's not exactly a compliment. Instead of being discontinued for whatever reason (another brew?) it could have been vastly improved upon, but that's obviously not the prerogative of this particular company. I hope when they laid this one out to rest they came up with something a lot better... because this at the least had potential. And that's the most positive thing I've got say.

Email ThisBlogThis!Share to TwitterShare to FacebookShare to Pinterest
What the... Beer, Märzen